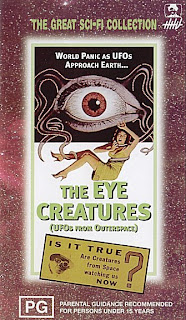 Glad y'all found my Monster A Go-Go post, considering I wrote it fairly late in the afternoon, knowing I was going to be up north in Ukrainian Village last night, and there were some great comments, plus GW Ferguson seemed to have shambled out of hiding. His mention of THE CRAWLING TERROR made me at first confuse it with THE EYE CREATURES, a film where the invaders are killed by teenagers using cameras with flash bulbs. Crazy teens. Though I'll tell you, if you read up on GW's favorite film, there are times during the last 8 years where I've often felt that self-propelling myself into a giant slug's mouth might be the easiest way out. Back to MAGG, why Chicago? Well, at one point some guy in a suit is pointing at a map north of Chicago. My guess is that he was NOT pointing at the now closed Glenview Naval Air Station, but rather at the mythical town of Schermer, the setting of several John Hughes' films, most notable FERRIS BEUHLER'S DAY OFF. If that space capsule landed in Schermer circa 1961 with all the radiation pouring out of it, well, that explains a lot. Also, its funny I just posted on viaducts, because at the end (which I can now talk about because Capcom admitted she saw it, just forgot), the actor from 1965 who played the ten foot tall astronaut (as opposed to the 1961 actor, who was maybe six feet tall and looked like Marty Allen) wandered around our BIGGEST viaduct, lower Wacker Drive (seen in the last half of THE BLUES BROTHERS). A sign that reads Wabash Ave, with an arrow point upwards, well, thats still there. And even though its blurry you can indeed see the Chicago Police Star and logo on the squad and motorcycles. And as the men walk around with those Geiger counters, well, some of those short viaduct stairwells looked damn familiar (I've posted about lower Wacker Driver before, its one strange place, the site of Chicago's only death by crossbow.) What's funny, and I didn't know this until today, the next film after MAGG on TCM Friday night was THE GIANT SPIDER INVASION, filmed in the middle of Wisconsin during Polka Days (and yes, I posted about this earlier in the year). To really make it a trifecta, though, the first film shoulda been THE BEGINNING OF THE END, in which giant grasshoppers go from Rantoul to Joliet to Chicago in a film that is uncannily correct in a Mapquest kinda way. Even though I've seen the spider film recently (to me, that means within the last decade), I'll likely watch it late in the night.
Posted by Wayne Allen Sallee at 11/23/2008 09:31:00 PM

I used to always wonder why the guys in BEGINNING OF THE END didn't corral one of the giant spiders from one or another giant spider movies to eat those damned grasshoppers. That movie's special effects sucked so bad that even as a kid I thought they totally sucked ass. In one scene, a grasshopper is clearly climbing over a photo of a building on a post card. No shit.

Something I've always wondered: Did the Chicago mob ever use Wacker Avenue to rub anybody out? It seems a natural...

That flashbulb thing remindes me of one of Kolschack's adventures where he used that to protect himself.

Yep, back from the dead and posting away!

I haven't seen a good monster movie in FOREVER. You're making me itchy to watch Giant Somethings eat/terrorize/stomp Someplace.

Oh yeah! The blobby aliens with the zippers up their backs, much like the underground Martians in "Invaders From Mars" V.1. :-) And some only have black leotards and creature masks on, haha.

MST3K does great work on "Eye Creatures", "Spider Invasion" and "Beginning of the End" as well. Really side-splitting. I always wondered tho, if the grasshoppers attacked Rantoul which is near Chanute Airbase (my birthplace! Another moth-balled base.), why didnt they just send in an air attack?! I guess the movie would be only 5 minutes long then. :-B

HM: It was actually 8x10 glossies the grasshoppers crawled over, but I am still amazed at how well Illinois and then Chicago is described georgaphically, right down to the street intersections, though why the big guys were hell-bent on going straight for the Art Institute is beyond me. I love bad special effects over CGI any day. Far as I know, the Outfit (as they call it here), never used lower Wacker as a dumping ground, more often than not, people were taught a lesson out in the suburbs, where they lived or went out for a meal. Unless they were behind the bow-and-arrow murder in the 80s.

Charles: The ending of EYE CREATURES always made me wonder why the hell all these kids had their own cameras, right there in the cars. If they had cell phones, they'd be SOL.

GW: glad that you didn't become PLAN 10 FROM OUTER SPACE--hey, everyone, GW told me about the remake of PLAN 9--and it will premeire on my 50th birthday, 09/09/09--and it would be cool to see someone do Ferris Beuhler vs. a giant Jeffrey Jones as the principal.

Steve: I found a DVD set of 60 monster films for $9.99, and only about a third of the films are the really stupid ones, like DIE! MONSTER DIE! A pretty decent compilation, even has CARNIVAL OF SOULS on it. Not familiar with Fido, will look it up.

Capcom: thanks. I've kept the post thread going because I can tie it to Chicago. I'm not certain how Herschell Gordon Lewis got the OK to film, but lower Wacker would be the place. Above ground is all the crappy new town homes, down there its like a real home. Damn warm in the winter, as well.

Years ago, Glenbrook had been called Schermer because of Schermer Lake. Its pretty pricey--North Shore is right up there with Gold Coast for Chicago lingo--so that's why all the kids in the Hughes' films came from rich families.