Back At The Farm 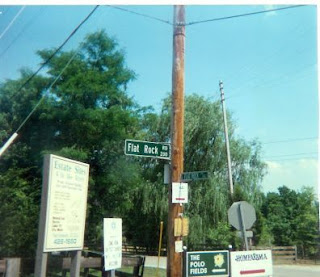 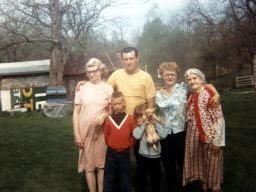 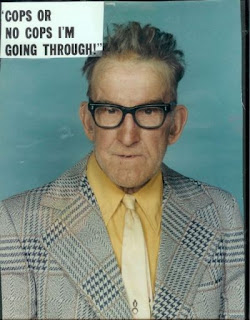 Bob and Charles asked about the status of the farm off Flat Rock Road. First off, my grandmother's name was Grace, we called her Busha, being the polaks we are, and eventually everyone called her that until she died in 1992. My granddaddy Grover died in 1996, but the two had been divorced since the 1940s. As you can see from the photo with me in the pink and black bowling shirt--Louisville has a Big Lebowski Fest every summer--and the bottom family photo, the farm always seemed in need of repair. Never had indoor plumbing, a barrel next to the crumpled awning provided rainwater, the coldest water I ever drank as a kid. The property was sold in the late 90s, don't know much more as the Kentucky kin can stay tight-lipped, though I do know that my Auntie Dorothy sent me a check for $5,000. (If only I was aware of eBay back then). Many of the rooms were empty while Busha lived, as various relations died, my great-grandmother Amanda in 1973--October 11th, driving down I-65 all night, as she lay on her deathbed, I heard Elvis singing "Burning Love" a dozen times, as it had been released that same day. Mary Alice, a mentally disabled half-sister who was deaf and dumb, and her brother Marvin, who had been kicked by a horse as a kid. That's Marvin in the photo, I inherited his clothing, wallet, glasses, and Bible. I'm dressed in his clothes in the Johnny Algiers photos on the left side of the blog. I have no idea when the photo was taken, or why, but it came with the package and I'm hoping he's getting a laugh from the caption I added. The last photo is of Grace and Amanda on either side of my parents, James Leland and Dolores Josephine, my father always had a little James Garner in him, particularly from THE ROCKFORD FILES days, and my sister Debbie evidently trying to strangle our chihuahua Pebbles. And of course, me. Evidently, my mother had been shopping for my clothing at the LOST IN SPACE resale shop....Wayne
Posted by Wayne Allen Sallee at 7/25/2007 08:40:00 PM 3 comments: