And In Between, The Empty El 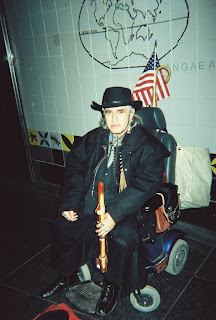 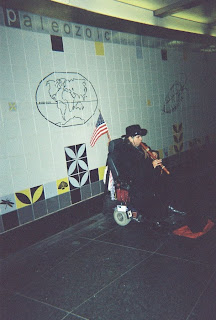 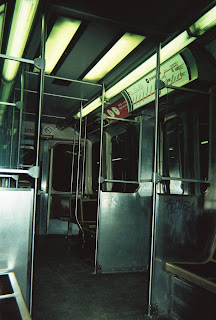 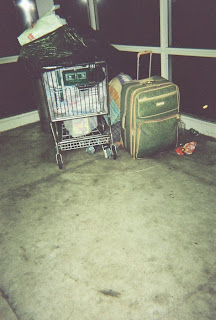 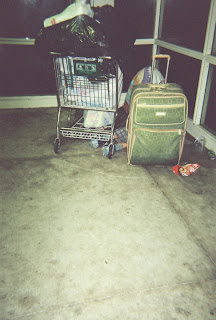 Waiting on the CTA sucks of late because of budget cuts. So last Monday, the 383 Pace bus shows up first, and I ride down to Midway and catch the Orange Line. I'm headed to Clarke's on Lincoln, to have dinner with Darci, Mike, and Becky. To get to the Red Line, you hop off the Orange Line at Roosevelt, then take an escalator to street level, then another down to the bowels of the city. And then, there's a walk down this long, long hallway with paintings of trilobites and such on the walls, and past that the final escalator down to the next level of hell. At the entrance to the long tunnel, I met this fellow Bill, who only has one leg, and he played a wonderful rendition of "Somewhere Over The Rainbow" as the train rumbled beneath us.

On the way back home, the el car I was in was empty, so I took a random shot. Then, here's what goes on. I get off the train at 87th and State to wait for the bus, and with the new construction, there's a tunnel to walk under 87th and wait for the bus in this well-lit square, but it is cold because the walkway just leads to where the Dan Ryan Expressway is on either side, and the cold whooshes up from the trucks and the el trains. When I took the first photo, I thought the bags belonged to a homeless person that was standing outside, his or her swag in sight. It was a long wait on the bus, again, the budget cuts made it two buses an hour instead of four. So it wasn't long before I realized that there was a body in the midst of the bas and shopping cart, his or her head covered by a blanket. I held out a five dollar bill and told the person my intentions, a hand that looked like a broken branch took the bill, and I saw a slow nod from beneath the blanket with earth tone colors.

Soon after, the bus pulled up. I'm not ashamed to say that I stared at a woman in very tight jeans and knee-high boots. She was talking on a cell phone. I sat on the bus, the computerized, sexy female voice oozed out the intersections.100 West, Vincennes, Aberdeen, Holland, Honore, Ada. The girl on the cell got off at Ashland, where a huge Currency Exchange dominates the northwest corner of the intersection. There was a #9 Ashland bus waiting for her, headed back north. Sacramento, Utica, Beverly Country Club. Kedzie, Central Park and the railroad tracks. Pulaski, a block away from my old home, a place that sold flowers and tombstones right next to a Dunkin Donuts just past more train tracks. All the streets names until Cicero start with K, and then I have to walk home past streets starting with L. Strange way to grid the city. Northwest, it goes all the way to P. Pacific, Pittsburgh. Can't think of any more.

Anyhow. The whole ride home, instead of reading Beat The Reaper by Josh Brazell, or skimming through Selina's Big Score, written and drawn by Darwyn Cooke, I stared out the window. You know, like Richard Kimble, on his way to the death house. Thinking about how each and every one of us survive in this maddening city, in this fucked-up world.
Posted by Wayne Allen Sallee at 3/07/2010 12:28:00 AM 1 comment: