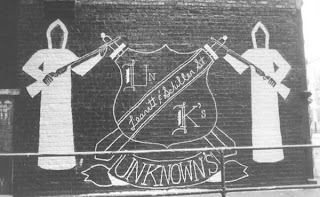 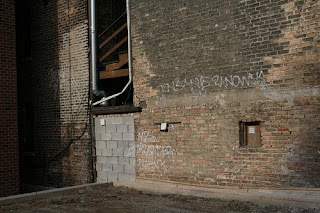 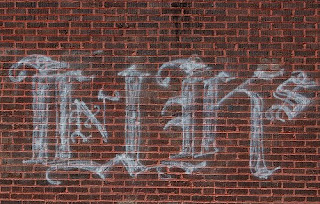 Far be it from me to say any one good thing about a gang other than every single gang member should be boiled alive, they are like drunk drivers, the ones who kill ten people in a head-on but live because they slide under the seat in their own vomit at the point of impact. And the idiocy of the rivalries, the Haddon Street Cobras against the Thomas Street Cobras. Yes, these are two east west streets in Humboldt Park, just north of Crystal Street. One. Block. Apart. You'd think they'd have different names, like the Cobras vs. the Super-Cobras. But I'll tell ya. I want to know who came up with the name Insane Unknowns, because that is just, just...how the HELL did a lousy gang member come up with two words that just sound great together? Its a Puerto Rican gang that goes back to the 70s, and their territory is or was (?) around Fullerton & Leavitt. The latter street runs north/south and the long-demolished hospital I was born in, Lutheran Deaconess, was at Thomas and Leavitt. When I'm going up north and take the buds to the Red Line at State, I actually pass 87th and Leavitt. Where was I? Oh. The Insane Unknowns. The most I find in the way of rivalries is that they fought an all-white gang, the Gaylords. That could be worse. Up here by me, there's the Polish Popes.
Posted by Wayne Allen Sallee at 1/09/2010 11:42:00 PM 4 comments: