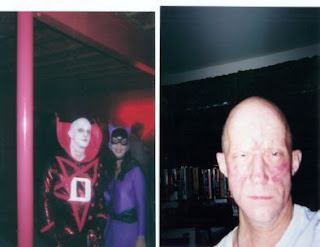 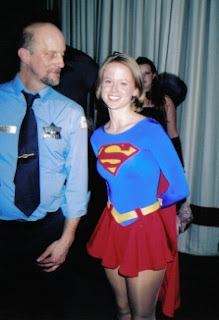 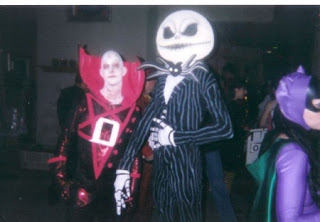 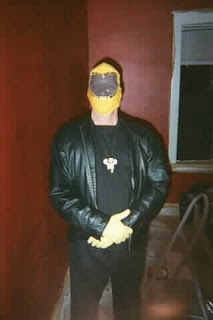 How was I to know that if I mixed latex frokm Izzy Rizzi's Trick Shop and paint primer that the removal of my Boston Brand outfit would cause my eyebrows and part of my cheek to peel off? It took two years for my eyebrows to grow back, and, guys, its amazing how hot and blinding the sun is, so don't ever think of shaving them. Even if Stewart uses that as a cult hazing. The following year I just dressed as a cop and tried to arrest Supergirl. That same Hallowe'en, vibrating one second from our existence on Earth-14, Sternberg himself wore my Deadman costume (cobbled from an old Daredevil costume, I am so resourceful)and swiped Jack Skellington's wallet. That's how he could afford starting the Earth-14 cult. The bottom photo is not a costume at all, its me as The Phantom Bee of Burbank. Keeping the souh suburbs Sternberg-free regardless of where in the multiverse we are....(by the way, I have been making references to Earth-14 since before I knew Stewart. His influence humbles us all, even Marlboro Spartacus, my name on Earth-23.) Wayne
Posted by Wayne Allen Sallee at 9/08/2007 09:52:00 PM 5 comments:

Who Watches The Watchmen? 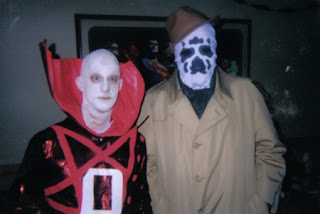 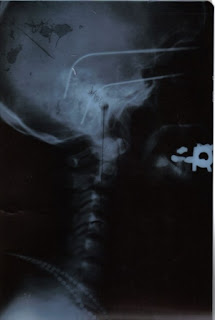 I am writing this entry simply so that you don't need to see the "I Coulda Been A Contender" photo anymore. I've been working fourteen hour shifts again, and will be working again within hours of my typing this. So I found the oddest (and most colorful) photo in my secret stash, but couldn't pass up on my previous thread, and so posted an x-ray of my skull. The circle shows the area that is the cause of my nosebleeds. That, or where the alien implant is...Wayne
Posted by Wayne Allen Sallee at 9/08/2007 12:47:00 AM 4 comments: