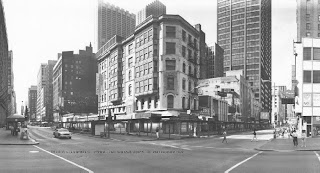 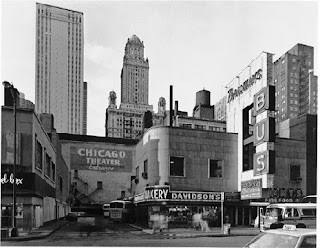 I found a few more shots of the Trailways depot, and tomorrow I'll tell you all a very odd story involving a knife and a bathroom. For now, let me discuss this ghost street. It is also known as the Spaniel Block, for reasons unknown to me. If you look at the black and white photo, you can see the taller building in the center of the block on the left (south). This is Ground Zero for my love of Block 37. The building was closed, it had been some sort of bank, or at least there was a smashed metal sign dangling near the roof. Remember metal signs? I guess if too many of them dangled and so that was that. But I used that vacant building as the Rainey Marclinn Home For the Handicapped, a kind of SRO for people in wheelchairs and crutches. This was in The Holy Terror. I'm so anal-retentive that I had to use actual vacant buildings for my fake settings.

I shall now discuss real life, back when I could actually bum around downtown at all hours because the buses pretty much ran all hours. The 62 Archer bus ran up State to Cullerton, then cut diagonal to Pulaski at 54th, and I could catch my last bus around 1 AM. Nowadays, that last bus is at about 11 PM. (And where I live now, that last bus is at 8:10 PM.) But there were two theaters, Woods and United Artists. I recall seeing this film, Frankenstein Island, that would have been cooler if it wasn't for the rats falling from the ceiling in front of the screen. Still a crazy film, though. Of course, Frankenstein wasn't in the film. Maybe I should make a film and call it, I don't know, Eva Mendes Island.

That sign that says BOOKS? I lived there. Really. They had pinball machines in back, and a billion porno novels in front of the joint. All categorized. Lonely housewives. Secretaries. Gay military. Non-gay military. Military housewives. And some straight up crazy novels. I have mentally beaten myself up over the years because I never purchased MY DACHSHUND, MY LOVER. It was one of those books with just a white cover and black artwork. On the plus side, if it can be called that, I still own NAZI CAMP FOR VIRGINS. Nothing bad there, aside from the title. It could have been in OUI or RASCAL, SIR! (Yes, that last one existed.) But mostly I played Captain Fantastic & The Browndirt Cowboy and the ones made by Williams where everyone in the artwork had arms and legs at 90 degree angles. There was a Burger King next door and often I couldn't eat because I blew my quarters on the games, and when I was older, my 25 cents times 5 or 10 bought me that one book and several black light posters. (I never bought LOVE CAMP ON WHEELS, but I did find it at a truck stop in Pennsylvania years later.) And you could always smell pot in that place. I smell it, just thinking about it. There are many stories about this ghostly block. Ask Rich Chwedyk. He could see the possibilities of turning Ray Milland's camper from PANIC IN YEAR ZERO in that love camp.
Posted by Wayne Allen Sallee at 1/20/2010 12:01:00 AM 1 comment: