Day of the Fly-Bys 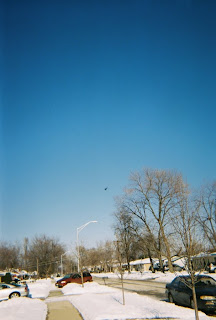 Yes, more helicopters. Or the same helicopter. Or my drugs on brain. This was Wednesday, the 13th. Our only sunny day this entire months. Now we've had some cloudless nights, but, really, so what? It's night in winter and, yes, maybe I can see a few stars, but again, it is winter in Chicago.

So I'm heading to the bus for my comic book fix up at Tenth Planet and all of a sudden, I can hear it coming. As the sun was higher than normal, it being closer to noon, it took me a second to see it, even though I knew exactly what trees it would appear from. The other two shots were good as I got some decent scenery from the other end of the block. For a change, I stood in the street, ice-covered as it was. I do have one photo of a rotor blade and a solid blue sky. But the story does not end here. I am on my way home, the last leg of a half-mile walk from the bus stop made shorter by zipping through the lot of the baptist church and, all of a sudden, there's the sound. I grab the camera, snap two shots, facing west, the second shows an apartment building where a truly yappy weiner dog lives. You should hear it in summer. I get inside, make lunch, bring it upstairs, turn on the computer, and even as it is booting up...there's the sound. I knew I had one photo left, so of course I took the photo. It's all second nature to me now, like if a zombie lived in my toilet bowl. I'd accept that, too.
Posted by Wayne Allen Sallee at 1/22/2010 10:40:00 PM 2 comments: