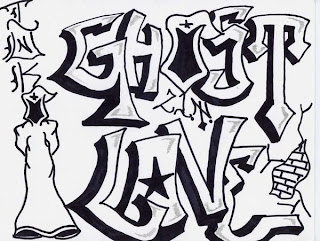 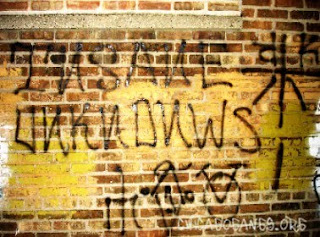 I'll stand by the fact that I think the use of the two words, Insane and Unknown, makes for my favorite gang names ever. I suppose if anyone Googles this, I must sound like I am praising them. Well, yes, you tough guys, I am. But the 4 Corner Hustlers sound like guys who give blow jobs. Might as well be killed for a reason on these postings, right?

Locations: Kostner to Pulaski is just east of me, I live in the L-named streets, Cicero to Pulaski are the K-named streets. It kind of gets goofy after that, but it was meant for miles to State Street. Grand Avenue is up north as it shoots off like a comet once it leaves the Loop. Cortez and Hirsch streets are in Humboldt Park, north of Crystal Street, and I should mention here that I refer to it as Judd Hirsch Street just to keep my sanity. You got me on all the other towns, Elgin is pretty big, and they can have North Chicago, to be honest. I love the fact that these guys have an an email address at AOL. Here's to ghost love only the way us horror porn writers handle it.

GHOST WITH 2 SHOTGUNS WITH A SHIELD UK INSIDE IT


The Insane Unknowns date back to the 1960s. A group called the Division Skulls merged with a group called the Unknown Souls in the year 1967 and called themselves the Insane Unknowns after the merger. These groups were affiliated with the Latin Kings and were said to be LK factions that disagreed with some the ways that Latin Kings were handling business. The Latin Kings were not very fond on this break off and even made fun of the Insane Unknowns initials (UK) and called them Unknown Kings as a slang term. In about 1972 or 1973 the IUKs moved to the north side of Chicago and went to war with the Latin Kings for a few years. It is said that they took up their symbols based upon a Puerto Rican motorcycle gang. In 1976 Mr. Kapone befriended a Black Gangster Disciple and a Simon City Royal and they all hung out together at a house on the corner of Wayne and Wrightwood. Royals Popes and IUKs had a very brief friendship in the 70s this was how this relationship began. Even after the war restarted between SCR, Popes against IUK these three hung out. The Royal among them was Dead Eye who was a former Palmer Street Gaylord from the 1960s who flipped to Simon City Royal in the 70s. When the Simon City Royals heard of this relationship they infuriated and they ordered Dead Eye to kill Mr. Kapone to make the situation right. So one day Lil Kool and Dead Eye (two Royals) killed Mr. Kapone near a hot dog stand in 1976. The Unknowns then intensified their war with the Royals. They were also warring heavily with the Spanish Cobras. In 1979 the Unknowns were accredited with the assassination of King Cobra, the leader and possible founder of the Spanish Cobras. In 1978 the relationship between LKs and IUKs was so great that they began to share the corner of Leavitt and Schiller which was one of the Latin Kings first original North side sets back in 1961 when LK formed on the North Side under the leader ship of Papa King. Papa King actually lived on the corner of Leavitt and Schiller (he moved there in 1961). By 1978 most of the LKs flipped to IUKs which caused Leavitt and Schiller to become IUK hood. After Mr. Kapone was killed in 1976, the IUKs killed Bulldog R of the Simon City Royals. Bulldog was the leader of the Wrightwood Park SCRs; therefore, after his assassination, Wrightwood park was taken over by IUKs. In the early 90s the IUKs went to war with the LKs, but the war was ended in no time. In the late 80s the IUK spread in to suburbs such as Zion, Rockford, and Waukegan. In 1992 the IUKs went to war with the Spanish Lords. In recent developments, the Insane Unknowns have become a secret organization once again, and it is even said that the Unknowns no longer claim People Nation affiliation.


The Locations of the INSANE UNKNOWNS were submitted by a "member" of this organzation
. K-Town Unknowns :
. Grand to Cortez , Kostner to Pulaski
. Cortez & Kostner
. Hirsch & Karlov