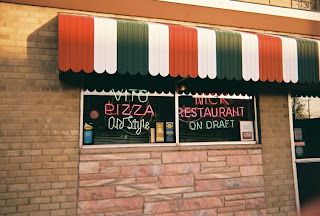 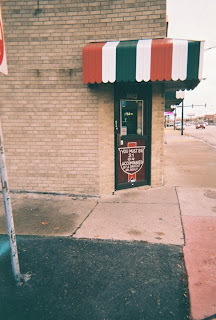 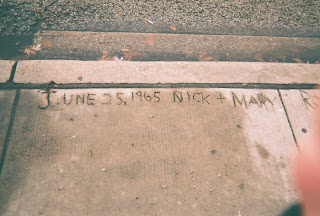 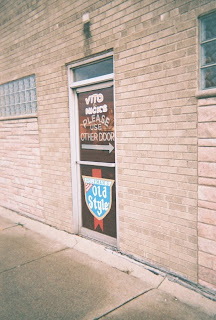 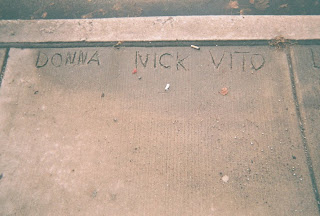 Yes, yes, it say's Vito & Nick's right there in the window. But in my old neighborhood, 9 out of 10 people simply said Nick & Vito's when asked what kind of pizza they wanted. Mind you, this place is still around, I mean with the interior looking exactly as it did in the 60s, linoleum floor and all. Pulaski Road has not been kind to businesses the further south one goes. This has nothing to do with the gangs and such, for now even Tuzio the Tailor has closed up shop and scrammed back to Italy. Bulow's Drive-In was torn down for the first strip mall--tiny as it was--in our area. Appliance stores became a video rental place run by Chicago cops, then it became a series of cell phone stores before being boarded up, as maybe 30% of the old neighborhood is. Taverns became real estate agencies and then went back to being taverns, the only difference being that the first time the place was a tavern, shots were called hookers, and old white guys snuck away from their wives at 7 in the morning. 79th & Pulaski was a hub, of sorts, because of William J. Bogan High School (dubbed the Great White Hope while I attended classes because it was the last 100% white school in the city, the year my sister started, there was one black girl and, inexplicably, two Chinese boys). Across the street is a White Castle, and that place will be there after the the cockroaches run the planet. We nicknamed Pulaski "Pizza Row" in the 70s because between 81st and just past my block, maybe 85th Place, there was Pizza Hut, Pizza Pete, Pudgy's (now a huge chain called Waldo Cooney's), an Conte's, which stood toe-to-toe with Nick & Vito's even though there was only two benches in a driveway to hang out. Their last name is Barraco, and there are plenty of Barraco's scattered throughout the area, one is just down 87th past where I live now. Its only a stand up place, you can stand by the window and eat pizza slices. Nick & Vito's was the place, though. We had alleys in the old neighborhood, so I'd enjoy walking through my auntie's back yard, down her alley and then the intersecting one that led to the parking lot. For any of those reading who have ever been there, you'll agree with me when I say that these pizzas seem so thin compared to all the Chicago-style places, but the look is deceiving. And it is probably the greasiest pizza in existence. Which is a good thing. After a few slices, your fingers had a sheen like you'd been juggling a glazed ham. The Barraco's franchises are a different type of pizza, the triangular slice deal. The original place cut their pies up like chessboards. I liked to fold one piece on top of the other. I can imagine a planet somewhere out there that has a grocery store where the equivalent of Saltine crackers is a box of Nick & Vito's pizza squares. And, yea, I'm one of the 9 out of 10 who call it by the wrong name. And now I'm hungry.
Posted by Wayne Allen Sallee at 12/13/2009 10:37:00 PM 7 comments: