Just Sayin', Is All 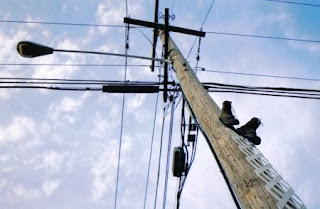 About a year ago, after getting off the bus, I saw a corner house (this was not a walk home) which always had a flag hanging on a post near the mailbox. It was an older guy who lived there, and in the early twilight I saw that the flag had been set on fire. I quickly put it out, it was just singed around the edges. I knocked on the guy's door--it was then that I discovered his age--and he thanked me, telling me that it was the third flag that had been set on fire that year. The other week, I was passing by that fellow's house and had to take a photo of the telephone pole near the mailbox. Maybe the person setting fire to the flags found himself in a position to see the flames from a different perspective. One can only hope. I only run into the old guy every few months, he still unfurls the flag, and we still wave at each other, acknowledging our respective existence in the city confines...Wayne
Posted by Wayne Allen Sallee at 4/30/2008 10:55:00 PM 5 comments: