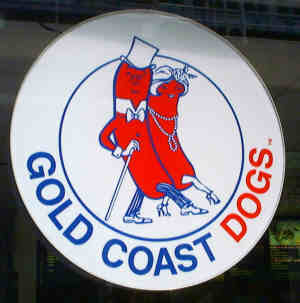 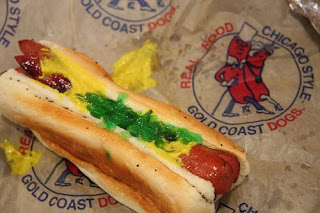 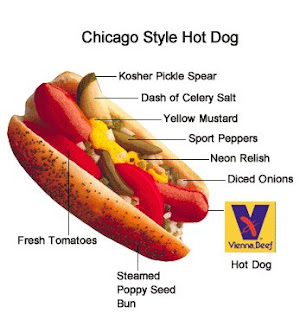 Just as we have our pizza, we have our hot dogs. At one time, there'd be as many Dave Berg signs hanging under the logo of a hot dog joint as there were ZIMNE PIWO signs beneath Old Style logos. I enjoy Gold Coast myself, because I can then eat the dogs as I'm walking up the steps to the el. Odds are, I'll finish my second dog just before I slap my fare card to the turnstile. You get a crapload of fries with each dog, so if I buy four dogs, I'll have a hefty bag of fries. I found a Google diagram of the perfect hot dog, Vienna-style. I miss the Dave Berg signs, though.
Posted by Wayne Allen Sallee at 1/31/2009 01:48:00 PM 10 comments:

Six Degrees of I'm Not Certain 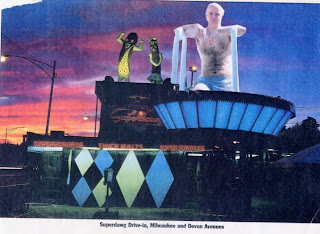 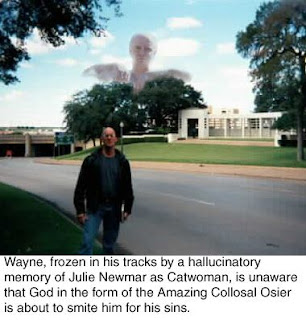 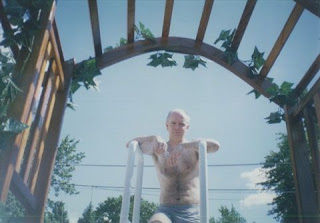 I will always manipulate the universe with scissors and tape. And so it was that I saved a photo of Jeff Osier from my infamous 4th of July party in 1996--infamous in that it stands as the coldest day of record, July 3rd barely hit 45 degrees--and made him hover over the two Superdawgs, which Rich has named in his comment on my previous post. Then Harry got an idea and a few years after the 4th of July AND the Amazing Colossal Superdawg photo, Harry mailed me (yes, via the USPS) what he called "Awooga," and so, when I scanned it into my computer, I kept the name intact. Now, I must tell you all that Jeff Osier is the number one believer in Superdawg's, he took his wife Cathy Van Patten there right after she moved here from Virginia, and I think they still have SD sweatshirts. I found the photo in a copy of Tribune magazine and thought, you know, I could cut around the edges of the building a slide in the photo of Jeff on the pool ladder. This is how my mind works nearly 90% of the time. What kind of goofy thing can I do next? Well, I think I'm done with Superdawg, but I thought it might be best to get these three images all in a row, for the sake of future generations.
Posted by Wayne Allen Sallee at 1/31/2009 12:00:00 AM 5 comments: