Curse Of The Four Sticks, Redux 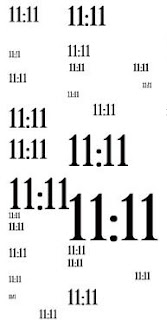 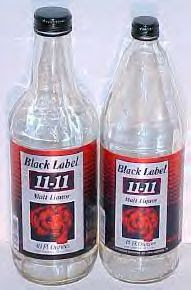 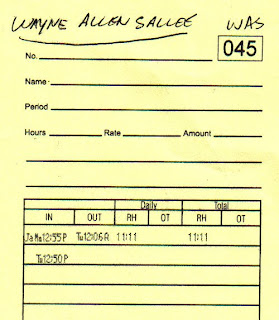 I've posted the shot of my royalty check before. I had scanned the time card from my old job a few months back, waiting for the eventual Four Sticks Curse to rear up again. At this point, though, not being at that particular job, I thought it might be a cool idea to include a bottle of 11-11 Malt Liquor. Yin and yang, good karma and bad. The reason I finally found a reason to post on the curse, the origin of which can be found by clicking my previous links below, is because, yes, the numbers have shown up again. This isn't a Hurley on LOST/numbers station listening post kinda thing going. In short, once someone is told about the Four Sticks, they will appear in your life when least expected. For no reason. Case in point, the following excerpt from an article I was using for research:

Joseph "the Clown" Lombardo was at a workbench in his small Near West Side shop, where masonry saws and tools are sharpened, when 10 federal agents swarmed in.

One agent waved a grand jury warrant, another carried a cotton swab. The agents dabbed the inside of Lombardo's mouth with the swab--gathering DNA--and were gone in less than two minutes.

Lombardo, a longtime Chicago Outfit leader who publicly swore off his mob ties after being released from prison in 1992, is one of more than a dozen mob bosses and associates who are subjects of a new federal probe into long-dormant mob murders, some dating as far back as three decades.

A federal grand jury is investigating at least 16 unsolved killings, making it one of the biggest law-enforcement strikes against organized crime in Chicago history. Sources close to the investigation--dubbed Operation Family Secrets--and attorneys for some of the alleged mob members say they expect the grand jury to hand up indictments as early as next month.

Convictions on this scale would be unprecedented. The Chicago Crime Commission counts 1,111 Chicago-area gangland slayings since 1919, but only 14 have ended in murder convictions and three cases were cleared when the suspected killers were murdered before being arrested, according to the commission.

Why not just say over a thousand? Why not round it off to Eleven hundred? ts because complete strangers are trying to drive me mad in the past, present, and very likely in the future, coming up with ways for the damnable sequence of ones to show up again and again...Wayne
Posted by Wayne Allen Sallee at 5/26/2008 10:14:00 PM 9 comments: 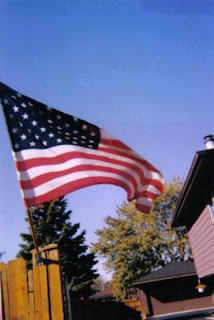 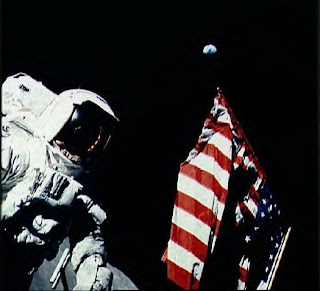 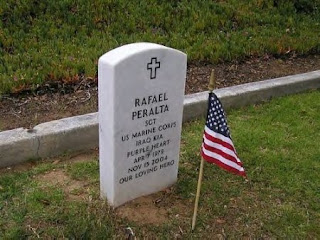 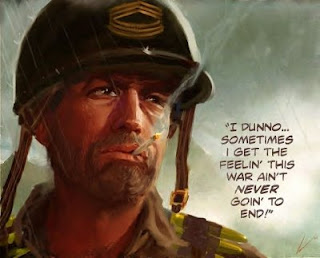 I like this photo, which was taken during the summer of 2005. Look close and you can see the nearly full moon. We have had a flag in view since 9/11, but we've always flown one on Memorial Day. My dad was in Korea as a decoder. I have cousins that are retired military and who have sons in places they never should have to be in. I thought this year I'd find a photo of the flag on the moon with our planet in the background, the whole mirror image thing, but I came across that third photo. There are more important things to show with a flag in the foreground on Memorial Day, of all days. The moon will be there forever. I leave the final words, again, to Sgt. Rock of Easy Company...Rest easy, servicemen and veterans. Wayne
Posted by Wayne Allen Sallee at 5/26/2008 11:45:00 AM 4 comments: