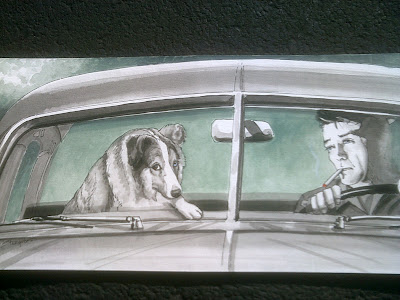 My November essay for Storytellers Unplugged.

I’m listening to Roxy Music at the moment. I sometimes forget that I own certain CDS, and I’ll bet none of you would have guessed that the first CD I ever bought–sigh, in 2000–was the B-52s Greatest Hits. Wait a second. Okay. I just switched to Sonny Rollins, I swear that jazz is like crystal meth. I listened to Bryan Ferry sing “Avalon” and that was enough. Thinking on it, I should be glad that Bristol Palin wasn’t involved with one of Roxy Music’s dance numbers on that wonderful show on Monday nights that has now spun off into Skating With the Stars. The show I really want to see I Dancing With the Ice Road Truckers. The reason I was listening to RM was because I had been talking with my roommate of twenty-five years ago, Rich Stergulz, on the phone a few hours ago. Rich had illustrate the painting of my dead collie Buddy and Robert Mitchum in the opening credits from Thunder Road. Back in 1985 on the far north side, as we carried everything down four flights of stairs, someone had a cassette player on in the laundry room, and always equate leaving the Rogers Park neighborhood with that song about riding in your car and a song comes on the radio and it drowns out...well, gang drive-by shoot-outs in that neighborhood at the time. Enough of that, the more I think of the band even after I’ve put on Rollins and Max Roach, I get this image of Bristol being forced into performing to “Love Is The Drug” and making moves like Ripley did in that yellow robot with the clampers in Alien 2. Hey, if I have to have that image in my head, now so do you. And if you want the CD, I’ll mail it to any one of you and I’ll even throw in The Sweet’s Greatest Hits and one of Ron Jeremy’s porn movie soundtrack, because I somehow have two of those.

A few people here in Chicago who have read my novel, upon hearing that I have no intentions on writing a follow-up, have pushed me towards thinking otherwise. I have given it some thought, and I suppose my travails during the colder months might sensibly follow Proactive Contrition, but if I do this it would like writing a sequel to my metatextual memoir less than a year later. Haven’t truly decided yet, but I’d likely call it Constant Winter Scattered, and then each of these books could be compared to yet another Doobie Brothers farewell concert. Of course, I should also point out that in my state of mind during the colder months, the book might just look and read like one ridiculously long Chick tract. Stay tuned.

My year is structured differently than most other people. Thanksgiving and Black Friday have little to do with it, but 2010 is effectively over for me now that the day rarely reach thirty degrees. Of course, that means that the next year has started, because I can’t just stay in limbo until March. Except in my head, a place where I can talk to cows, make unicorns on rainbows for Asian women, and be either a NASCAR driver or George Clooney’s stunt double.

Maybe that’s why I’m more addled than usual, because for these first few days of cold weather, I really am somewhere in-between places. A polar bear with menopause. Any of you seen The Walking Dead on AMC, or read the books? You know what would be worse, would be if the apocalypse didn’t turn people into zombies, rather followers of the Westboro Baptist Church.
Posted by Wayne Allen Sallee at 11/27/2010 10:57:00 PM 2 comments: