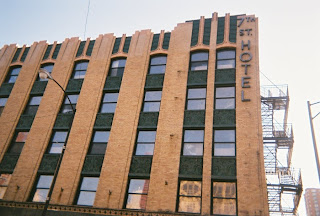 Yesterday I posted a shot of 11th Street, the only actual street sign I'm aware of. Here's a shot of the 7th Street Motel (AKA the Carter Motel), which was quite rundown in the 80s. A nice restaurant, the South Loop Club, on the ground floor helped it along. The el tracks from the last photo also run past the building. I still have a very vivid image from maybe a dozen years back, the train was stopped momentarily so the car I was in faced the back of the motel and a young and totally black woman in capris stood on the fire escape smoking a cigarette. Of course, I had no camera. But every time I pass that building I think of her, the way she held the cigarette, her face in the direct sunlight.

Anyhow. There is no 8th Street, its called Balbo, and 9th is Polk, 10th Harrison, and 12th if Roosevelt. So why there is an 11th is a mystery. Unless it has to do with the Four Sticks. There is a huge building of condos at 2 East 8th, which is bullshit because the street sign right effing there says Balbo, but the asshats living there wanted a better sounding address. Asshats, I say. I have a character called the American Dream, you see. And he jumbles up things because of his meds and has an invisible sidekick named Blind Justice. Long ago, AD heard Simon & Garfunkel sing "The Sounds of Silence," and misheard "the shadows of an Eighth Street lamp," as "beneath the shadow of the 8th Street Man." As if his nemesis held sway over a portion of downtown, back in the day. So that's the story. Next time, I'm back south and talking pizza.
Posted by Wayne Allen Sallee at 12/11/2009 10:59:00 PM 3 comments: 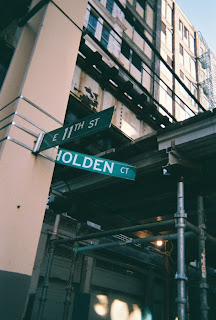 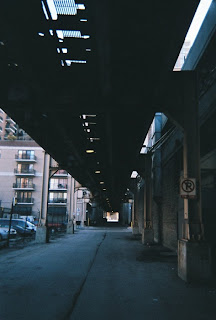