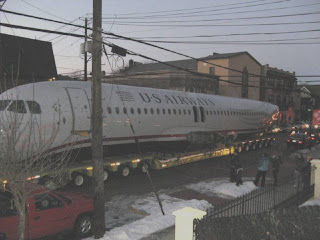 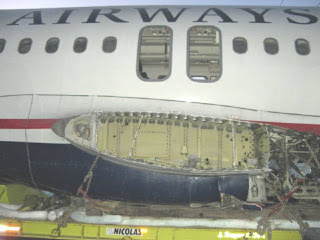 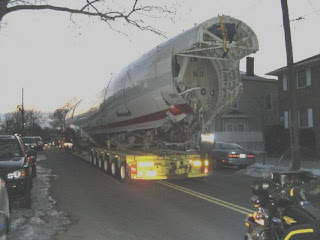 Another ex-employee at the printing plant emailed me these photos of Flight 1549 after it was pulled from the Hudson River. I suppose I hadn't given it much thought that the carcass would be a flatbed swerving around side streets in tiny New Jersey towns, just like when the US military had crashed saucers underneath giant tarps and those same flatbeds drove through those same towns. I try and kid there,because in truth, I'm terrified of flying. The third and fourth photos actually got my heart going, because at least the first two made me thing of a plane on the ground. Mind you, if I had to fly tomorrow, I would, though I really do enjoy Greyhound more than any other method of travel. At the end of the month, I'm going to Mo*Con in Indianapolis to sign books and I might just fly Southwest from Midway. So, while flying terrifies me (even more than those big black ants), I'll still get on a damn plane and not go goofy. Its just one of those deals where you have to realize there isn't a damn thing you can do if things go wrong. Back in 2000, I had a story on an audio CD, PERSONAL DEMONS, and it ties in with that fear. I guess my real fear is that I couldn't write about the plane crashing because I'd be distentegrated...

The world we build inside ourselves
to dwell in when we die. –Christopher Priest