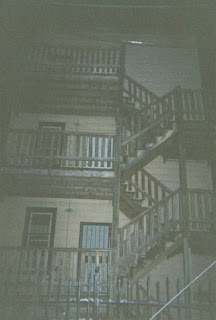 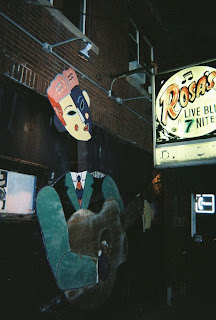 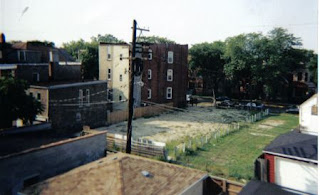 Saturday night my old roommate from Rogers Park, Gary Krejca (yes, THAT Gary Krejca, I know!), came by and we went to his cousin's birthday party up in Ukrainian Village. Last time we got together, in much warmer weather, we went to Rosa's, a blues bar on Armitage, and that is where I took the cool photo of the kind of back porches there are on the north side. We were fairly close to Humboldt Park and I mentioned to Gary how run down some of the thru-streets were (Crystal, which I grew up on, stopped and started) and I made a point of telling him about the bottom photo when we passed Potomac Street (a block north of Crystal), which goes east-west over much of the city. The side streets are being converted to town homes, as with every other neighborhood up north, the basic three flat keeping its exterior but being converted to six or nine town homes in place of three apartments. Thankfully, the main street, in this case, Western Avenue, is still the same, dumpy apartments on top of taverns and aptekas. Gary commented that we were the oldest people in the bar, the Round Robin (I think). We were carded by a youngster who, Gary also believed, would have asked us to leave because we were too OLD, not the reverse. I just had a few Cokes and Gary had some draft that came from a pointed gnome's head and a tattooed girl who had this Joan Jett thing going worked the stick. Gary and I left around midnight, it was the coldest night here since March, maybe 10 with the wind chill. It makes the streets barren of everything but cabs, and those were few. I'm still familiar with the area--Christ knows I haunt it enough in my stories--so I pointed out a HI-FI store that now had butcher paper in its windows and a Citgo now standing where there used to be a playlot (the tiny park playing a huge part in my story "Augusta Boulevard, Sunday Night"). It was too cold to try sniffing out if the aloe factory was still around. Men who worked there (besides smelling minty fresh) wore huge green buttons that read "Ask Me About ALOE" on their uniforms. As we walked back to his car, I commented that the deserted streets wanted me to hear a Bruce Springsteen song, even the blog entry name, though that song obviously takes place on some county road. On a warmer night, tavern doors might have been open, and if wasn't a polka drifting out onto the concrete it might certainly have been Springsteen, as popular with the Poles as Big Steve & The Stevedores or Frankie Yankovic. It was great getting into a warm vehicle, but it sucked leaving the neighborhood next door to where I grew up.
Posted by Wayne Allen Sallee at 11/24/2008 11:28:00 PM

that bar was the Blind Robin...

Man, it's been a longggg time since I've even set foot in a bar.

It's nice that you have good memories of the place where you grew up. I had a place like that when I was a kid--the house where I lived in Decatur, GA between the ages of eight and eleven. Those years were absolutely perfect. Alas.

I can't imagine being forced to wear an "ASK ME ABOUT ALOE" button. Out on the street??!! I'd say that I would refuse, but one never knows what one will do when desperation rears its head. I always swore I'd never pee in a cup (unless Nancy Reagan was gonna drink it up), but I did do the whole drug-testing thing when I got the life-saving job with the US Postal Service.

Um, what was that after 'tattooed chick with a Joan Jett thing going on'? It all got kinda hazy there...

"On a warmer night, tavern doors might have been open, and if wasn't a polka drifting out onto the concrete it might certainly have been Springsteen..."

Man, you can really set the scene. Thanks for taking me there. Evocative writing. [And thanks for the link.]