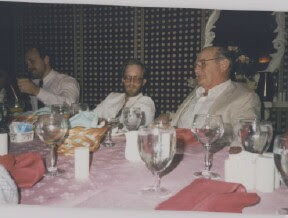 ...something's lost that can't be found. A prayer to St. Anthony, who I suspicion is NOT the patron saint for the Lost & Found Department. The actual phrase starts "Tony, Tony, come around..." but, being a dumb polak, I was brought up saying it wrong. I'll be the first to tell you that it works, if only as a mantra that gets your brain thinking in a different direction. Well, I didn't use the phrase today, but I read it in, of all places, a Stephen King book. I have never in my life of reading books written by Chicago authors living in Polish Roman Cat'lik communities seen that phrase. In the King book, the person who utters it is from the Boston area, so I'm certain the phrase was not out of place. I don't have any photos of St. Anthony, so here is a photo of myself and Tony Plichta, circa 1980. Looks like an early scene from GOODFELLAS, hmnn? Still lost, Wayne
Posted by Wayne Allen Sallee at 12/10/2006 09:10:00 PM 3 comments: