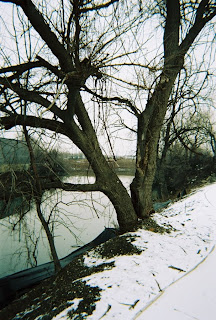 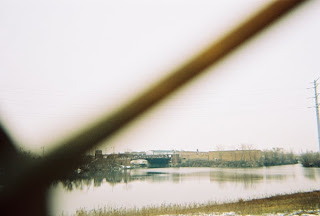 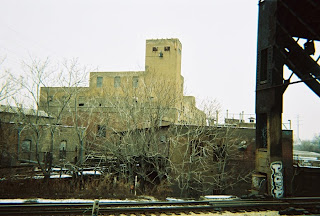 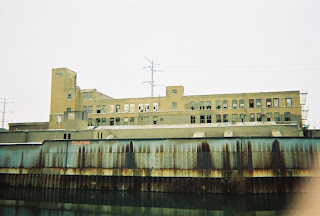 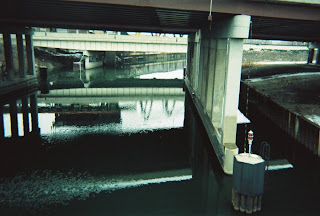 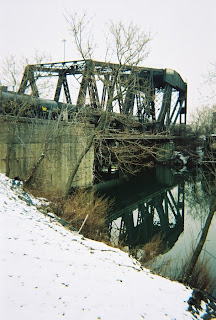 Not posting much, I know. Winter and the werewolf claws. But on the upside, I started writing a novel, set in real time and I'm writing when I'm hurting the most, but it has an odd little hook that will either get my agent to sell it or have my name placed on the GooGoo Crazyman List. Either works for me.

Here is what the opposite of Bubbly Creek looks like. I took the Archer bus from the Loop and walked under the viaduct at I think Lock Street. There's this odd little wedge of the city, with different street names like Hillock and Short, bordered on two sides by the river, and one kind of ends in weeds near I-55. I was specifically looking for Vintage Street, just a block long and named for some sort of beer company. I knew they were building those hipster town homes, and sure enough, no more Vintage Street, the lot is demolished, and these days the street numbering will simply continue as Hillock. Or maybe James, I forget. And I'm too pissed off to look now, you know me and those damn hipsters. So I walked as far north as I could, where I'm taking the photo through the fence. This was Eleanor Street, but it now is a memorial drive for some person. Not that as I walked back towards the viaduct, I could have pretty much slid down the hill for a dunk. Man, some days seems like such a good idea. I like the shot with the trees. The two shots of the factory are the side facing east, you've seen the same building only with my camera pointing north from the el platform. I did take one more shot from ground level as I was walking to the Ashland entrance to the el.
Posted by Wayne Allen Sallee at 2/22/2010 11:50:00 PM 4 comments: