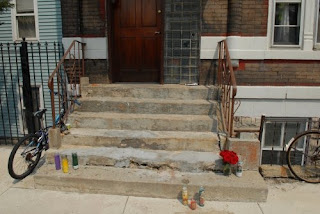 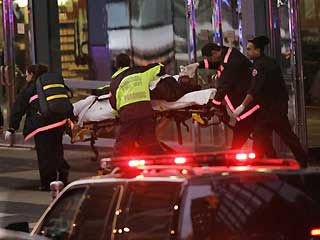 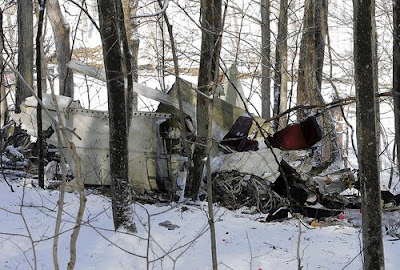 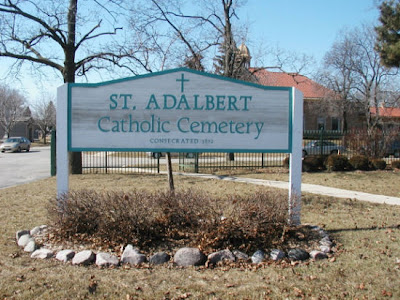 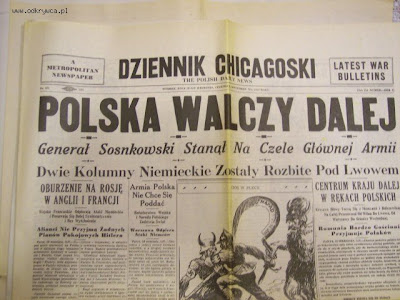 All week long, I have seen Polish flags on cars driving down my block or up 87th Street. A show of mourning after last week's plane crash in Russia that decimated the Polish equivalent of the White House. Burbank is over 30% Polish now, younger families that have migrated (or so I say, in my "old man" speculations) from Archer Heights, an old polak Chicago neighborhood of two and three flats just north of here. I think of the Mexican flags that will be flying during Cinco de Mayo, car windows down, music blaring. Fine by me, because the Polish and the Mexicans have polkas in common.

Maybe its because I'm so used to "Who Stole The Kishka?" (Hint: It was Stashu.) , that I zone them out, yet if I'm waiting for a bus at 8 AM and hear a nice Mexican polka, I cheer the hell up. When I worked at the plant, Carmerina and Sophia in bindery listened to polkas, and when I got a ride hom at midnight, after a 12 hr shift, the polkas playing on the car radio kept me wide awake in the cold of winter. Many of my family members are buried at St. Adelbert's, which is as about as far northwest as you can get and still be in Chicago. Mamach. Szostak.Rushko. If I took a decent guess, I'd say the place was filled with 80% Polish ghosts. And I posted an image of the old Dziennik Chicagoski, which is now printed in tabloid form and slick paper.

OK. Cut to last night (Thursday). Our first warm night, it was in the 80s all day, and our Friday high came at midnight. In the Englewood neighborhood, considered (by me) to be another level in hell, there were 16 shootings that left 7 people dead. The area is 100% black, and I always scratch my head at the grandmoms and aunts who say their kids were hood kids and yet they get killed on a street corner at 3:15 AM on a school night. Since the start of the scool year, 130 school kids have been killed, most of them shot, a few of them beaten. When it comes to mourning, there were a hell of a lot of sound bites about the Mayor and the PO-lice needing to step and do more. I wish the news stations would tally their sound bites for every death, and add up how many times you don't see the mother or father on camera. It's always an aunt or an uncle.


The Polish people are very religious, I can go to St. Albert's on State Road and listen to a mass in Polish if I wasn't sick of Catholic priests who need their balls cut off fucking alter boys. And for the most part, Mexican families in most neighborhoods are religious and tight-knit, and willing to talk with you instead of averting their gaze when you pass on the street. But I am sorry to anyone reading this who might think I have an ounce of racism in me, but the black population in Englewood, and in the Austin neighborhood, always expect others to clean up their own mess. Earlier this week, a 15 yr old girl was shot dead. She was pregnant. Are condoms expensive? Christ. Quite a few black men need their balls cut off, as well, or at the very least be introduced to some nice sout' side Arsh Catlik priests. And, in my opinion, there is nothing wrong with taking a gang member who just killed innocent bystanders and tasering the fuck out of him through his eyeballs. And if he lives through that, shoot him right there on the ground, hopefully in his own piss. But that's just me.
Posted by Wayne Allen Sallee at 4/16/2010 11:40:00 PM No comments:

Gotta Love The Onion, Part One 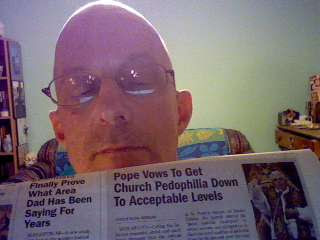