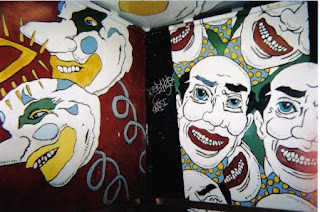 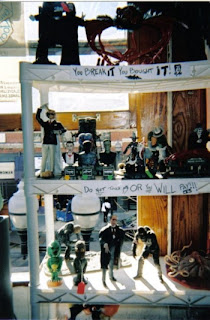 Bob caught this with only the images, which i sent from home. We had been talking about various shops full of goodies like dinosaurs and old books and vinyl records, and I thought of the House of Monsters, which closed about three years back. It was on the third floor of the Flatiron building at North and Milwaukee, the ground floor of which had several intriguing businesses such as The Quaker Goes Deaf, an oldies record store (sadly flooded during heavy rains in the late 90s) and a few small restaurants and tiny shops. The upper floors, accessible from a massive stairwell or the clown-painted hand crank elevator, were artist lofts. This area of Wicker Park was a haunt to Nelson Algren and has been regentrified to the point that nothing is as recognizable now as it was even ten, well, fifteen years ago. Ah, but House of Monsters. I still have a Universal Monsters tie I bought there, a Godzilla one was badly stained by some nasty coffee. Everything one could want, most I could not afford. I found copies of Fangoria I did reviews for and its sister magazine, Gorezone, which had my stories in it, back in the day. 16mm Japanese films, Frankenstein stamps and mousepads and keychains. Dozens of models and ready-made dolls and articulated scary things. Ceiling high racks of VHS tapes ranging from Murders in the Rue Morgue to Nightmare on Bare Mountain, which takes place at a nudist colony. I was able to locate the original version of Carnival of Souls there, about the creepiest, cheaply made film that I've ever seen and highly recommend. I don't know if HoM is selling online now, but i really don't care, because there is no real experience, and joy, and pleasure, as walking up that Frankenstein's castle stairwell and opening the door on such claustrophobic madness.
Posted by Wayne Allen Sallee at 11/07/2007 09:46:00 AM 7 comments: