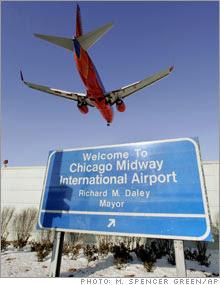 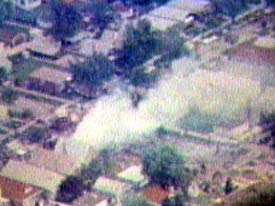 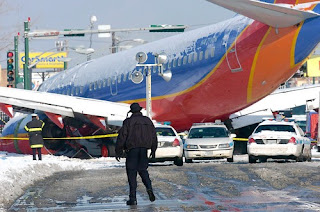 I heard the crash from my seventh grade classroom at Dawes, a mile to the south. The crash, the thud, was nothing compared to the sirens. A United flight had overshot the airport and crashed into several houses on 70th and 71st Street (Midway being at approximately 59th Street). My father--on patrol with the 8th District at 63rd and St. Louis--was the second squad responding at the scene and so I did not see him again until sometime on Saturday the 8th, our house smelling like blood and smoke for hours. My father, James, never talked much about his 31 years on the force, he might've mentioned in conversation the first time he shot his service revolver on the fire escape of the old Colony Theater, things like that, when pressed for the info. It was later that I heard about the dead bodies on garage roofs, the bodies in the plane melted into the coil springs of the seats, a severed head caused by an overhead compartment spilling luggage. My father still has frostbite in his right toes, 35 years later, and the crash is only recalled on conspiracy websites, E, Howard Hunt's wife died in the crash at the height of the Watergate investigation, why were there FBI agents at the scene before Chicago cops and firemen? For months I've been looking for the Chicago Tribune photo of the tail section sticking up out the the winter trees, but to no avail. There was another crash in 2005, almost the same day, this time the plane not stopping on the slickened runway. A kid in a car was killed, back in 72, 45 died and 3 on the ground. You can still drive down 70th Street near Kostner and see four homes that look out of place in the center of the block, new brick, built almost identically alike. (Nowadays, two-dimensionality in a neighborhood or subdivision is the norm.) Its always interesting when relatives from Kentucky or friends from downstate Indiana visit, they spend so much time looking at the skies at moving objects I've long ago taken for granted. Every twelve minutes if you keep watch on the right mote in the daytime sky that passes overhead as the next mote takes its place. Motes that sometimes fall from the sky...Wayne
Posted by Wayne Allen Sallee at 11/30/2007 08:39:00 PM 3 comments: