Are You Ready For The Great Atomic Power? 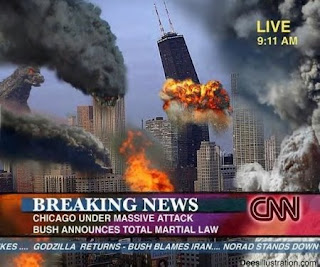 I'm as conspiracy-minded as the next guy (who I know happens to be monitoring my thoughts), so I've been following little tidbits all week. Lights in Indiana and the National Guard admitting they were performing night exercises. This morning's earthquake, which, I assumed, had occurred on the ACTUAL fault line, near New Madrid, Missouri. Not in Crawford County, which I wrote about in my missive about Bellair, and is in the opposite side of the state. Larry sent me the following link and I added information about the original poster. Scott AFB is in southern Illinois, and is like the Midwest version of NORAD. I'm as much for the fall of western civilization as the next guy, but I'm really only here to entertain with the following info, guys and gals. Now, let's take it on home to Jesus...Wayne

INDIANAPOLIS — Loud booms and strings of flare-like lights that brightened the sky two nights in a row over north-central Indiana may have been F-16 fighter jets on training missions, an Indiana Air National Guard official said Thursday. The booms shook houses in the Kokomo area about 10:30 p.m. Wednesday, frightening residents and prompting Howard County police to search for a downed aircraft, said Larry Smith, the county’s emergency management director. No aircraft debris was found, and Smith said he was at a loss to explain what some people speculated may have been a meteor. But Tech Sgt. Darin Hubble with the 122nd Fighter Wing, an Indiana Air National Guard unit based at Fort Wayne International Airport about 70 miles away, said military officials are investigating if F-16 training might explain the Kokomo booms and lights and similar reports Tuesday over Logansport. He said training often includes pilots shooting flares and can produce sonic booms that shake the ground below.

The quake -- one of the strongest ever recorded in Illinois -- occurred just before 4:37 a.m.----which brings us to a blogger calling herself Sorcha Faal----but first, some background...


The Order of Sorcha Faal was established in 588 (BCE) in Tara, County Meath, Ireland, and claim as their Founder the oldest daughter of King Zedekiah, Tamar Tephi.

The name, Sorcha Faal, comes from the ancient Gaeilge branch of the Goidelic languages of Ireland and has the meaning of: Sorcha: She Who Brings Light Faal: the Dark and Barren Place

The Order of Sorcha Faal comprises 18 Monasteries in Ireland, Russia, Egypt, Lebanon, and the United States.

And now, Sorcha Faal...(please hold all applause until the end of the PowerPoint presentation)...

By: Sorcha Faal, and as reported to her Western Subscribers

Reports from 3rd Army Headquarters of the Russian Space Command, located in Solnechnogorsk (Moscow oblast), are reporting today that a ‘nuclear fueled’ explosion has occurred in the United States region of Illinois after the downing of an American B-52 Bomber by, presumed, other elements of the US Air Force operating in that region.

So powerful was the explosion reported from this downed American Nuclear Bomber that Western propaganda media sources are reporting the effects of a 5.2 to 5.4 magnitude earthquake in that region, but to which the most accurate description of a nuclear type blast was reported by the Bloomberg News Service and who stated in their article: "You could hear a roaring sound and the whole motel shook, waking up the guests,'' Vibha Ambelal, manager of the Super 8 Motel in Mount Carmel, Illinois, near the epicenter, said in a telephone interview."

These reports further state that this was the second attempt by a US B-52 Nuclear Bomber to penetrate the North American Command Air Defenses surrounding the dissident United States Scott Air Force Base, located in Illinois, from which these aircraft seeking to bomb Iranian atomic facilities are based at.

On Tuesday, April 15th, American citizens to the Indiana region immediately east of Illinois reported numerous ‘booms’ and ‘flashes’ in their night skies which some attributed to fireball meteorites crashing into the atmosphere, but which the United States Air Force reported was caused by F-16 jet fighters ‘sonic booms’ and their use of ‘military flares’.

These reports, however, state that this April 15th incident turned back the first abortive attempt by dissident American Forces to secret their plundered nuclear weapons out of that country for their intended use against Iran.

The ‘trigger’ to these latest desperate attempts to embroil the World in Total War arose from the US Defense Secretaries ordering of a full accounting of all American Nuclear Weapons on March 28th after the discovery of that an unspecified number of them were ‘missing’.

The first attempt to use these ‘missing’ nuclear weapons against Iran we had previously reported on in our April 5th report titled "US Nuclear B-1 Bomber On Iran ‘Attack Run’ Shot Down" and which occurred in the Middle Eastern Nation of Qatar.

Russian Foreign Ministry spokesman further report that the American War Leaders were warned this past week by the British Prime Minister, Gordon Brown, and by Pope Benedict XVI, both of whom traveled to the United States this week, against the attempts by the US to escalate their conflicts into another World War, but which by these latest events these War Leaders appear not to have listened to.

As we have previously reported too, the United States believes it has no option other than Total World War as their economy continues imploding while at the same time fuel prices are rising to catastrophic levels and more food riots are being reported the World over, all of which when combined signal the collapse of the American Empire on a scale not seen in since the collapse of the former Soviet Union on June 12, 1990.

It remains, without doubt, that the people living within the United States will not be allowed to know the full evidence of these events, and their imminent destruction, except by the means of dissident sources of information such as ours. But, and most strangely, the New York Times, and a publication not known for the reporting of dissident news, appears to have changed its course with its April 6th article titled "Duck and Cover: It’s the New Survivalism", and which said:

"THE traditional face of survivalism is that of a shaggy loner in camouflage, holed up in a cabin in the wilderness and surrounded by cases of canned goods and ammunition.

It is not that of Barton M. Biggs, the former chief global strategist at Morgan Stanley. Yet in Mr. Biggs’s new book, “Wealth, War and Wisdom,” he says people should “assume the possibility of a breakdown of the civilized infrastructure.”

“Your safe haven must be self-sufficient and capable of growing some kind of food,” Mr. Biggs writes. “It should be well-stocked with seed, fertilizer, canned food, wine, medicine, clothes, etc. Think Swiss Family Robinson. Even in America and Europe there could be moments of riot and rebellion when law and order temporarily completely breaks down.”

Survivalism, it seems, is not just for survivalists anymore."

This advice by the New York Times that the time has begun for Americans to begin their preparations for survival echo those of the giant US Banking concern Wells Fargo, that Britain’s Guardian News Service has recently reported warned these people: "Scott Anderson, chief economist at Wells Fargo, is equally pessimistic, describing the bullish views of some market players as "bordering on delusional", but which as their life savings continue to disappear they continue not to heed.

For the final outcome of these events we, perhaps, will have little warning, but, and surely anyone with open eyes can see, the storm clouds gathering on the horizon.
Posted by Wayne Allen Sallee at 4/18/2008 09:54:00 PM 5 comments: