No More Photos, I Swear On Elvis's Grave 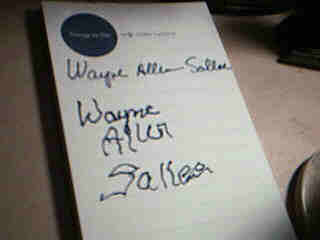 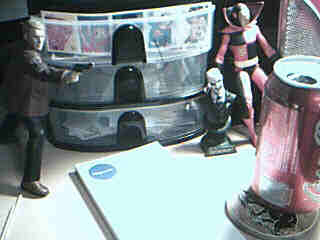 I am pretty much at the end of this portion of this second life. Seems as if complete strangers to my blog, like jane is dating, along with regulars like Lucas Pederson insist I stop with the photos. OK, so no photos of me with a pig nose, or with the bandages off and metal sutures in my nose (I thought one was a nose hair and battled pulling it out, bad idea). By 1995, I had had 12 operations, both on my arm and my head. The following year I had a kidney stone, but that is not even worthy of a tale, unless you want graphics about a clamp being placed into...well, I can't even continue. Instead, I have posted two simple shots. The first is my little laboratory by the computer, with Steve McQueen threatening to shoot me if I stop writing, The Gentleman (from Buffy) and my favorite pest, the Psycho-Pirate. The second photo shows my handwriting close up. Pretty good with my left hand again, 17 years after the accident. The damn right hand still sucks donkey dick at anything (my big joke is that if I try and masturbate with my right hand I might as well be trying to push my dick through a Play-Doh Fun Factory), and the writing still shows like a damn EKG chart. I had to use my right hand to sign medical documents, bills, even a few books. Why the HELL was I using my middle name even when I was signing an agreement that it was OK to put me under anesthesia? Regardless, it was during this time that I started using gel pens. I'm hurting as I type this, simply from using donkey dick to write three words, the brain impulses are flying all over, maybe the hand will think it can turn into that movie monster Beast With Five Fingers. Peter Graves, right, Sid? Charles? (I think Sternberg was actually in the film, through his latex time portal). I may be writing with no real direction here because I am listening to a CD of Afrikaans music that Etain mailed me and my blood pressure seems to have flattened out by listening to Laurika Rauch and Anton Goosen. It is like music you would hear in the background of a film that involved a journey of some sort. Which kind of brings me back to the stasrt of my second life. Obviously I continued writing, for better or worse, til death do I part. I have been saddened at the passing of writers from the generation before mine, Karl Edward Wagner, Robert Bloch, and Evan Hunter. I'm watching new writers like Lucas Pederson, Barton Fanning, Drizel Burger, and others put their toes in the literary pool. And I remain in the trenches with Sid and Larry and Bob and Roger, moving forward story by story, getting closer to The Big Break. My luck, I'll finally get noticed but will lose in a coin toss to a transgendered dwarf named Vinnie Cthulhu and fall back into the relative obscurity I live in now. Glad I'm not being graded on this essay. Over and out.
Posted by Wayne Allen Sallee at 3/24/2007 10:26:00 PM 7 comments: