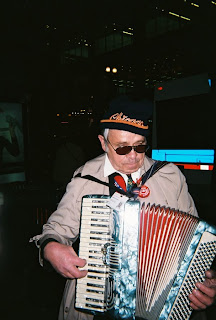 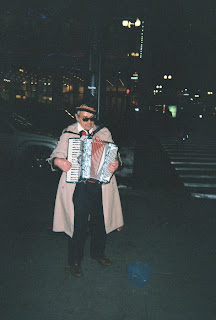 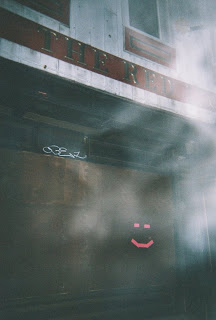 Dick Contino called his accordian a stomach Steinway. I need to write about Dick one day. Google him. He's in Chicago for local summerfests. Neat guy. Anyhow. This fellow was in front of the Borders across from the Chicago Theater last Monday. I stopped there on my way to the readings, just to see what is on the shelves to further depress myself. This fellow wasn't out front when I walked in, and as I walked out I thought maybe a falling brick had hit me in the head. From far away, I honestly thought I was looking at Cab Calloway. After realizing this was not the case, I talked with him a bit. He's up here from Alabama, for who knows what reason, it being below zero and all. I asked him if he could try "Ain't No Sunshine When She's Gone" and he actually came up with a good, if somwhat (and expected ) jaunty version of it. I handed him a fiver and as I walked down the steps to the subway I could hear regular polka music floating over my head. Later, I walked over to the Red Lion, our old haunt, because someone told me that it was boarded up even more securely. I took a phjoto once I saw the smiley face on it, but with the photo developed, it seems I caught a ghost on film. Or maybe just some tall guy smoking an unfiltered Pall Mall exhaling as he leaned over my shoulder. What do I know? I was cold.
Posted by Wayne Allen Sallee at 12/15/2009 11:08:00 PM 2 comments: 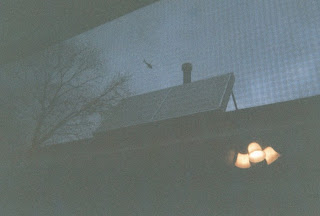 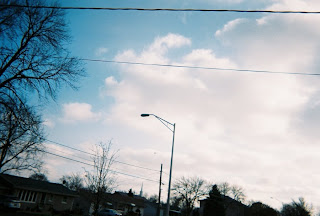 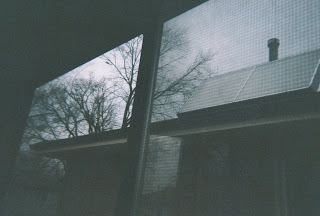 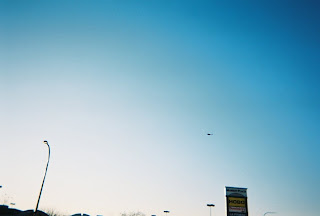 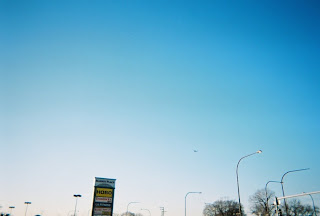 If anything, these photos show you how schizophrenic our weather is, because the photos were taken on two consecutive days two weeks back.The bottom two are from a vantage point at the bus kiosk as I waited for the Cicero bus northbound. Two hours later, after having driven me home and we jawed in the driveway, Andrew Kudelka saw one of the helicopters coming back towards its mothership stuck in a hanger at Midway. The sky actually looks this blue as it gets colder, which kind of pisses me off. But I guess its like having your cake and eating it, too. I'd rather having hot weather and sky the color of horseradish. The two that show the grim cloud cover are just 14 hours later, where the clouds came, who the hell knows. Its Chicago. But there's the helicopter flying over my backyard as I was typing here, and a few minutes later, I heard one again. Its over by the trees, near Leamington Avenue. If I had been outside picking up dog crap, there's a good chance these would have been cooler photos. This way, though, it looks like I'm hiding. Or senile.
Posted by Wayne Allen Sallee at 12/15/2009 12:10:00 AM 3 comments: