A Rural Truth As Ugly 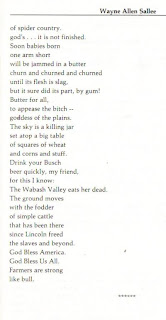 Mark Rainey and I made a trade of a few books and on my end it involved some early DEATHREALMS, back when it was digest-sized. I was particularly happy to see my poem with the title in the subject heading above, as I had only had a manual typewriter at the time I mailed it to Mark. Brings back memories, not good ones, certainly interesting anecdotes. I was in a town called Bellair in downstate Crawford County for three months in the summer of 1983. It involved a writer project aimed bringing attention to the town's general store, Bellair having three roads and a population of 54. There's a lot of pent up emotion in that poem, one of the longer poems from my pre-publication days. I was angry with how some of the townspeople treated us "hippies" from Chicago. There is a huge history to this story, but at one point I had to call home because the teacher who started the project had driven off with one of the twenty year old girls, and the Trailways bus depot in Effingham was at least 50 miles away. I called for a ride because I had lived off of a single pack of Saltines for the last three days I was there, sharing a yellow house with now windows with a flea-infested dog named Bobo. Several of the others involved in the project had cars, but were up at the U of I in Champaign for some kind of event. One of those guys, Bob McCoppin, about a week earlier, was as starved as I was. Things were not as they were promised, such as a refrigerator with food in it. In the dark of a moonless night, we went to a family's home because we knew the they had a dog and kept dog food outside. We stole a can of cold Mighty Dog and rushed back to the aforementioned yellow house. Then realized we had no can opener. We spent an hour using pens and cutting our fingertips getting that lid open just enough that we could scoop out the beige meat. I was actually getting paid for this gig, I wrote articles about the store and other events for the Casey Daily Reporter. I had $350.00 in checks. But no bank, currency exchange, or person in town (or neighboring Robinson, where the Heath candy bar family fortune is high up on a hill like that other Wayne Manor) would trade any check for cash or food, because we were hippies. I felt like I looked like Bob Seger instead of a younger looking Donald Sutherland in INVASION OF THE BODY SNATCHERS. But I was eating cold dog food that had been stolen. I'm still proud of that poem...Wayne
Posted by Wayne Allen Sallee at 3/12/2008 09:58:00 PM 5 comments: