My Bram Stoker Touch & The Cult of Sternberg 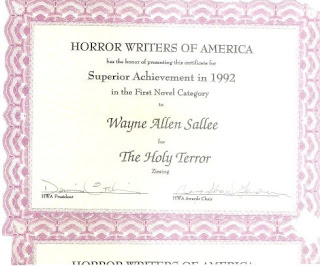 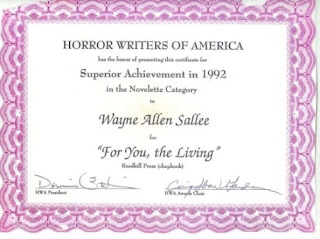 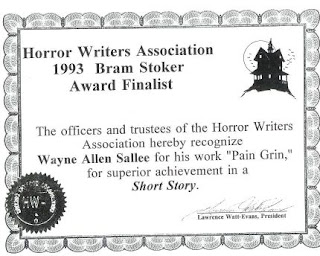 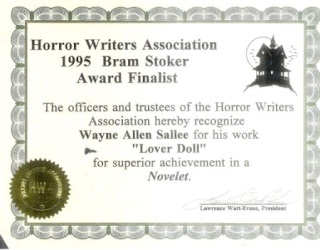 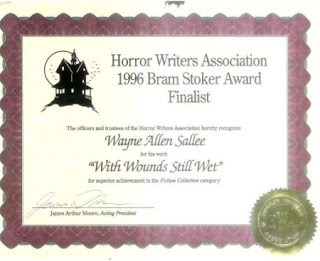 On Stewart "Cult of" Sternberg's blog, he requested--well, he tried to cyber-hypnotize--me to check out the website of this guy Scribbler580. Well, there's a good chance that if I go to this guy's site, from what Stewart says, he's a new writer, well, eventually this guy will win a Bram Stoker Award. As you can see from the above images, I've been a Finalist in five DIFFERENT categories, and, yes, Kate, I did call myself the Susan Lucci of the Stokers back in the day both of us were losers. I even lost to Stephen King by two digit votes. I alluded to my poetry yesterday, Annihilation Press will be publishing a collection, MEMOS FROM AN ELEVATED HELL, in the spring of 08. I'm not certain if the Horror Writers Association has a way for me to lose for poetry collection, it would likely be in "other media." Perhaps they'll include blogs in their awards, and I'll be a Finalist to Stewart. See, I have the touch. Way back in the day, the first person to want an autograph of THE HOLY TERROR was Bill Sheehan. I had not seen the book yet, having been on a panel when the dealer's room in Nashville opened. Bill had never written a thing, he simply enjoyed the cons and meeting the writers and artists. After awhile, he started writing. Then he wrote a biography of Peter Straub, AT THE FOOT OF THE STORY TREE. Then he won a Bram Stoker Award. Sternberg stares you down from his blog profile like a satanic James Lipton crossed with Malcolm McDowell. Go to his site. Find the link to Scribbler580. I'm afraid to use his name because there one day might be a Stoker award for People Whose Blog Wayne Allen Sallee Has Mentioned. As it is, amongst Bob and Sid and Etain and Charles, Stewart seems the likely one to kick my ass should that award ever materialize. Wait and see...Wayne
Posted by Wayne Allen Sallee at 9/02/2007 08:54:00 PM 6 comments: