The Second of Oldest Haunts 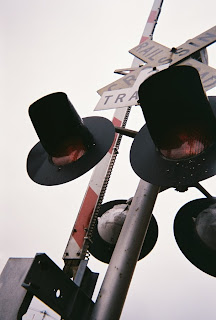 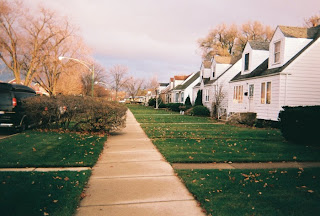 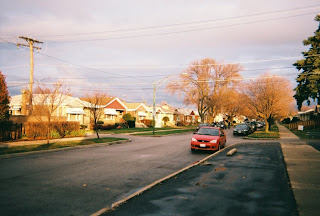 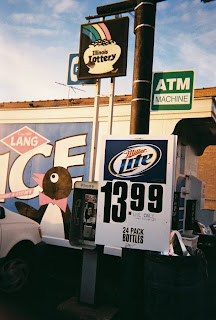 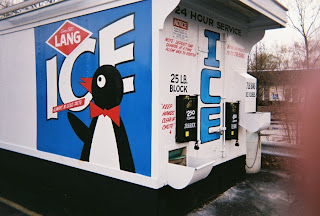 Humboldt Park, of course, being first. I lived off of 85th and Springfield from 1965 until 1999. Those damnable railroad tracks are situated at a crazy intersection designed by lunatics, one of those three streets that don't quite meet but so the fuck what, we're Teamsters. 87th, Pulaski, and Columbus Avenue (or Southwest Highway, depending on how old you are). The light could conceivably be red, then red again, then a train could go by, then two more red lights. I timed it once. The No. 52 bus was in sight for 12 minutes, just sitting there. I also took some photos of the Lang penguin. All of our ice in Chicago, evidently, is provided by Lang, who sounds like a private eye, you ask me. I like the one with all the signs cluttered about, the top one rusted away. And then there's 85th Street itself, plus 84th, because the colors seemed better. 85th is the one with the hedge. We watched Ashley every day until she was nine, and in the spring and summer she and my border collie Barbie (she named it) would walk with me to the hedges that at the time separated the Crawford and Burns houses, respectively. I'd watch them walk back to our house five doors back, then catch my bus to my evil job in the Loop. The neighborhood changed drastically by 1998, there was a crack house and a guy brandishing a gun to thugs who beat on his Jeep with a baseball bat. It was time to go. Even though I knew only one person on 84th Street, I happened to take the photo as I walked towards Nick & Vito's. But that's for the next post. The one that will make you all everybody hungry.
Posted by Wayne Allen Sallee at 12/09/2009 10:00:00 PM 3 comments: