It Was Twenty Years Ago Today... 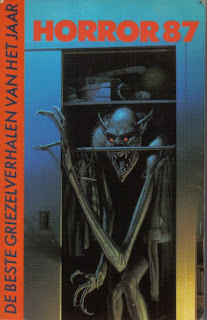 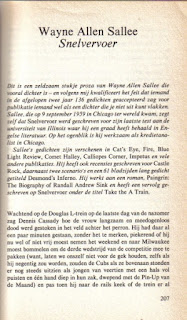 Well, in The Netherlands it was, and actually I should have posted this a few days ago, so that my post heading would be correct. I just got through mentioning Kees Buis yesterday, and in today's mail comes the Dutch reprint of my very first appearance in a paperback. It still wouldn't be until 1990, when I had a story in NIGHTMARES ON ELM STREET: FREDDY KRUGER'S SEVEN SWEETEST DREAMS that I truly made my jump from small press magazines, although I still support and submit to them today (and still get rejected, as well). This cover is the exact artwork from YBH:XIV, but I do really like the garish colors of the Dutch edition. I also enjoyed "reading" the intro to my story, because I quite obviously had little to say about my so-called career, and I see listings for poetry magazines long gone, one published by a professor at Richard J. Daley College who is most likely retired the better part of this century. This time around, I am going to send Kees one of the books Robert Bloch did not personally sign to me, since he is actually sending me books from his personal library and scouring bookstores for books I might be in. Nice guy, he is. Would other not to be named bastards simply have the common decency to let us know when a book is being reprinted overseas that we could purchase a copy direct. Ah, well. Karma and all. Some editors will die and come back as trees that will be destroyed in their infancy, not for paper but to make way for some new subdivision...Wayne
Posted by Wayne Allen Sallee at 1/01/2008 09:57:00 PM 4 comments: