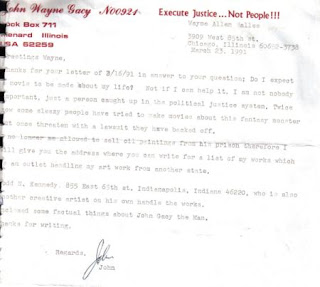 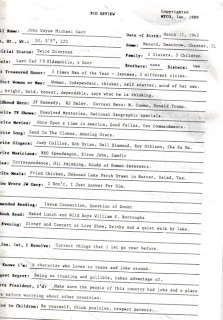 Sorry about how these images cut and pasted, its kinda like if someone gave the Unabomber a cheap-ass scanner. I touched on the subject of John Wayne Gacy in my Storytellers Unplugged entry for July 28th, and it prompted Thomas Sullivan and David Niall Wilson to get me to give up the goods on where I was on Monday night, May 8th, 1994. I wasn't watching the second half of THE STAND miniseries, if that helps. Gacy went to Hell that night, and I was indeed a part of the crowd watching him wheeled between Death's waiting room and the table where he'd get the black needle. (In the end, all I had to do was fax Nic Howell at the Illinois Dept. of Corrections my business card and intent to write an article for DEATHREALM magazine.) I've added the front page from that article on the left side of my blog, and it was reprinted in FIENDS BY TORCHLIGHT. The clown with the briefcase was actually in Daley Plaza during the events of Gacy Day Parade. I corresponded with the killer several times in the early 90s, simply to have documentation for my file cabinet, along with items like Police Evidence and Property Envelopes, things like that. (Of course, never knowing that one day Google Images would make my visual catalogue obsolete). I had very much wanted Gacy to send this questionnaire thing that he was fond of sending people, and I received it the day after he was executed, as you can see from the postmark. The strangest thing about the page is where it says Address: Death Row, Menard, Ill. The guy lived fourteen years too long, as long as the age of several of his victims. People ask me about Gacy at almost every convention I go to, I was even asked to speak in front of the Midland Authors Association about it at a paid dinner. At times, I feel like the dentist who identified Mengele by his dental work down in South America. At least that breed of bastard is dead, as well, although sticking around decades longer than he deserved.
Posted by Wayne Allen Sallee at 7/30/2007 09:17:00 PM 8 comments: