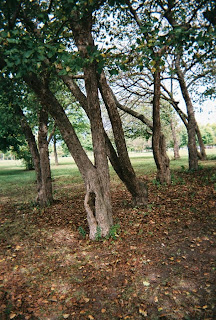 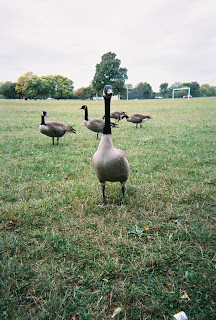 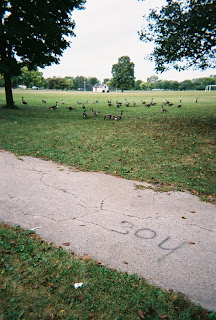 Right across from Holy Cross Hospital, Marquette Park is the largest in the city, with two lagoons. Tough place now, gangs and all. Years back, there was a building on 71st that housed the Nazi party, and they were righteously mocked in the film BLUES BROTHERS, and the scene was filmed right there, by one of the lagoons. That big goose in the second photo? I talked to him for quite awhile. The added bonus of talking to the geese is that the gang members leave you alone.
Posted by Wayne Allen Sallee at 12/03/2009 11:18:00 PM 5 comments: 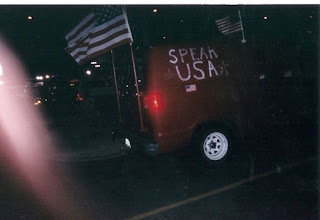 I was conversing with my friend Tiffany, who is attending Cornell and will one day be running NASA, earlier this evening and the subject of this photo came up. I took the photo about a month after 9/11, and I'm assuming the driver--who doesn't even know our OWN language--was referring to Arabs, because Burbank has a huge Polish population, but we border Bridgview, which has its own mosque, and is second in Arab population after Dearborn, Michigan. I always find it interesting where and why these ethnic centers pop up where they do. Well, my musing is over. Back to the photo of the van. The driver is an idiot.
Posted by Wayne Allen Sallee at 12/03/2009 01:03:00 AM 2 comments: