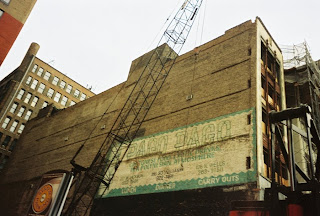 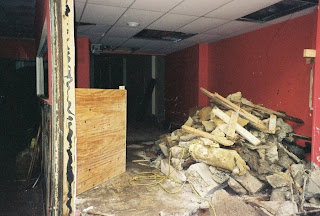 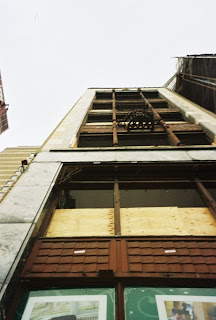 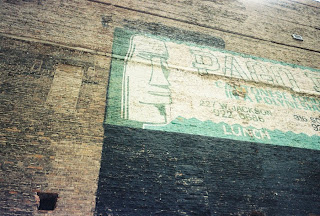 I'll be posting those fog photos, there's been a mix-up in my getting the CD disk. Pretty dumb story, but I will have them. For now, let me spend a few days posting photos of the Pago Pago Building, which is already coming down, just a day after I took a roll of photos. I was telling Rich Chwedyk that it seems impossible that Google Images doesn't have but one photo of Jimmy Wong's Cantonese joint, and I about freaked on Wednesday when, as the train left the Loop, I saw the familiar metal bars that always make me think of Tinker-Toys, and I knew what was going to happen. And so I headed back downtown yesterday. Wong's was across the street, torn down to be a parking lot next to Gina's Cuisine, whatever that is.

The Polynesian restaurant is long closed, but I always found it an intriguing building because of its length and thinness, it was like how Carmine Infantino illustrated Central City in a purple background in the Flash comics of the 60s. I have more photos to post tomorrow night, but these shots give you an idea of the exterior.
Posted by Wayne Allen Sallee at 3/12/2010 11:39:00 PM 2 comments: