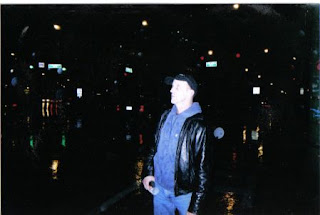 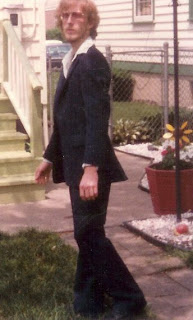 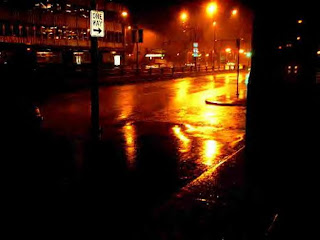 The first part there was the last line of a poem some guy whose name I can't recall wrote in Poetry 101, back in the day. May of 82. Can't tell you anything about the poem but those three words. I added the rest many years later.I got off the subject with the last post, I had wanted to talk about what Charles calls "iceberg memories." He brought this up commenting on my Don't Fear The Reaper post. It has rained these last few days, today much colder, but the last couple were simply delusional. Part of that could be my working 17 of the last 18 days, and I had moments of clarity as I simply kept my eyes focused numbly on the road ahead. A wind from the south, it could have been March. Iceberg memories are the ones that are deja vu-like, some underlying event that is so seemingly inconsequential that there is no reason to even own it in your brain. Walking in that rain, I kept thinking back to 1975, I rode my bike to my night job as a dishwasher at Ford City restaurant and later Golden Bear, further down the drive. The entire stretch of 77th Street Drive (you figure out city planning, ok?) between Pulaski and Cicero was empty lots of weeds, can of Pabst Blue Ribbon (none of that cute PBR crap), and a mile's worth of log thoughts. One night in that summer of silk shirts and hair that flew back over my shoulders as I rode down the cracked asphalt, I had an eight-track player on a strap over my shoulder and some nights it was Seger and NINE TONIGHT or NUTBUSH CITY LIMITS, Three Dog Night's SHAMBALA or FAMILY OF MAN, and the one song that always surfaces first is The Eagles' HOTEL CALIFORNIA, hence the title on my last entry. Long-winded am I, yes indeed. Maybe because I'm actually rotating the rods in my brain at a slower pace. But when I am in the March in November rain, walking in the darkness and hearing muted traffic, I always remember that summer I rode a bike across a deserted lot like I was Robert Neville in I AM LEGEND, nobody else alive, the Ford City apartments like a ruined smile as I closed in on Cicero Avenue. Now there is no emptiness, just fast food joints, banks, gangs, Daley College drop outs, abandoned cars and gunfire. Maybe I hear those songs because I want to remember a time when I felt I could actually control my destiny. Another iceberg memory, the rain taking me back thirty years in an eye blink....Wayne
Posted by Wayne Allen Sallee at 11/21/2007 09:50:00 PM 4 comments: