Well, It's Not Tornadoes or Blizzards... 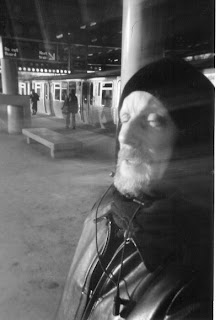 Sadly, this is me(IN THE SECOND PHOTO) during the daytime, back when it was last as cold as this weekend, January of 2002. But this was during the DAY. Waiting at the bus stop after work, it was dark, I was next to a sign that was basically posted on a lightpole in a guy's driveway, and there was nothing around me but six empty lanes on the I-94 feeder ramp to Indiana. When it gets this cold, my body betrays me. Anybody I have yet to meet in person this century reading this might know about the cerebral palsy on my right side, but its likely that they don't know that the circulatory system in my left hand is gone because of reconstructive surgery after I was hit by a car in March of 1989. After leaving my doctor's office. But I'll tell that story in March. I have part of my right hip in my left forearm--my family doctor, Peter Drugas, knew that it was the only way I'd still be able to type--but the various operations left my left hand my worst enemy on nights like this. I'm actually wrapping three fingers around each other to act as one strong one, still taking breaks every few words. Handwriting is even worse, because it involves the curvature of my fingers. Ironically, my grip is the strongest motion I can make; holding a SCIENCE magazine on the bus, I left indentations at the top of the pages. That's why I haven't been emailing or making blog entries, but I'm not going to keep fighting it, because the weather will continue to drop until Monday. The coldest temperatures since 1996. But as I titled this, nothing but the cold. I've survived the cold, arctic air before, and will do so again. Please, no replies about wishing me well or anything like that. On a night like tonight, I worry more over homeless people (LIKE THE GUY IN THE FIRST PHOTO) sleeping on steam vents in back of the Macy's on Wabash Avenue. I am fine, and to prove it: Tomorrow, I intend to write a blog based on the sound effect...PAETING.
Posted by Wayne Allen Sallee at 2/02/2007 10:20:00 PM 5 comments: