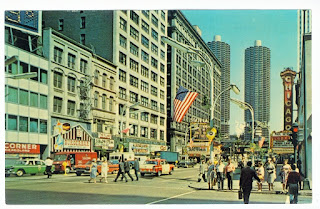 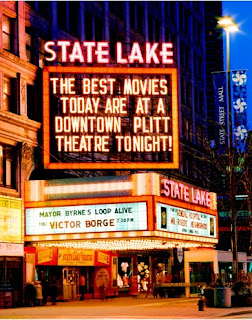 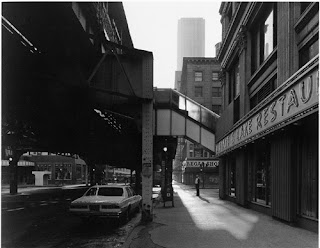 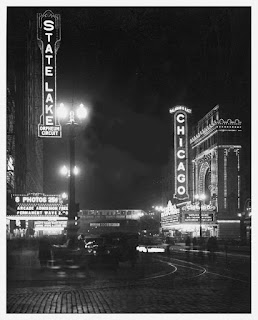 A few shots here of State and Lake, the first from the Chuckman Collection of Postcards, and the shot of the State/Lake at night by Tom Jelen. At the time I wrote The Holy Terror in 1988-9, nothing from that top postcard remained, aside from a bare bones Shoppers Corner. Where you see that portion of signage next to Burgerbar, that is Block 37, and so you've seen Mammy's, the Trailways and Greyhound depots, and the various theaters and greasy spoons intersecting just to the left off-camera. But in 1989, the State-Lake was closed, as was the Chicago. I can't recall ANY of these places, the Burgerbar, The Flame, or the dubious sounding Michelob Restaurant.
What is there now are housing for art school students and the Gene Siskel theater, with the entire buildings being built from scratch. The State-Lake is the 190 North building, the HQ for our ABC affiliate.

But I want to describe an image. From when the other, smaller buildings stood. I was working in the Loop in 1984, when there was no el train towards my home, and the massive buses actually had to trundle along I-55 to Pulaski Road. The buses all ran down State southward to Cullerton and Archer where we stayed on the Dan Ryan Expressway for about seven seconds before hitting I-55, the Stevenson. Trust me, it was like watching a movie where they tried to cram as many unseemly backgrounds--Chinatown, auto junkyards, freeway off-ramps--as possible into a, well, actually it was often an hour long ride once we hit the expressway. I learned to leave my job and walk northward to Lake Street and wait for the bus there. It was the second stop on the route and I was always baffled by anyone I knew from Adams Street being on the bus all pissed off that they were standing along with 75 other people in the aisles.

See that building next to the one with the fire escape? That is, well, it WAS 162 No. State. And for several years there was a bright balloon tied to the fire escape, red or orange faded to pink. It wasn't afloat, mind you. It was just there, the string possibly tangled with the fire escape next door. The balloon eventually deflayted and actually looked like a burnt candle hanging three stories up. One day it was gone, certainly not from anyone coming around to clean things up. I never thought to take a photo because at the time, that wasn't my bag. Buildings, sure. But not balloons floating like weighted lanterns.

Well, I'm glad I finally got that story out of the way. It actually seemed more boring as I continued typing. I do promise to get to the story about the guy with the knife in the Trailways bathroom soon. Oh, and the guy with the knife? That was me, trying to commit suicide.
Posted by Wayne Allen Sallee at 1/30/2010 11:49:00 PM 1 comment: