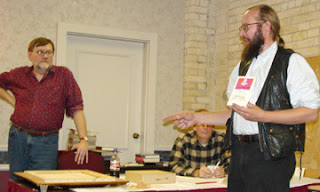 Philip J. Rahman was kind enough to pass on this photo from Arcana 2003; it was only us idjits from Illinois that called it Minn-Con. Probably to remind us to drive to Minneapolis, even though it was really in St. Paul. John Brower is standing at the left, listening intently to the late Peder Wagtskjald. Roger Lasley, who initially contacted me about John's death, is in the plaid shirt. Philip asked that the photo be credited to David Christianson. For those interested in this convention, it is very casual and low-key, with much discussion on the likes of Donald Wandrei, August Derleth, Hugh B. Cave, and of course, 'ol H. P. Scott Wyatt and Dwayne Olsen will likely have stories to tell at the next get-together. I am thankful for Philip's kind email and attached photo, though, in looking at my last photos, I realize how long it has been since I was in St. Paul, after driving up Half Deer Highway with Harry Fassl while wrapped in my Shroud of Elvis blanket in the pre-dawn hours. The Pepsi can in my photo with Dennis Etchison has the old logo and color, and in the photo with Robert Bloch, my Henry: Portrait of A Serial Killer shirt is still just barely faded. The shirt is my oldest piece of clothing, the words hardly readable now. Well, next to that Elvis jumpsuit, which goes back to when I worked with the Elvis band. All this babbling is honestly my self-contained memories of nice weekend getaways with decent folk. Not a single BIG convention was anything like the brief hours spent in a tiny hotel underneath an interstate with a bunch of guys who talked of wondrous things from nearly a century ago. Wayne
Posted by Wayne Allen Sallee at 1/13/2007 11:49:00 PM 2 comments: