Stepping Into The Twilight Zone With Dr. Richard Kimble 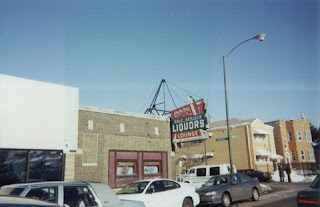 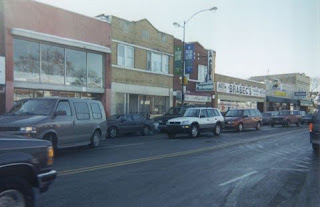 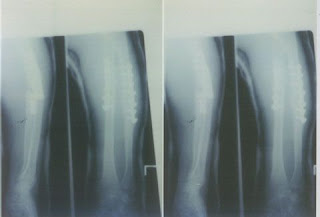 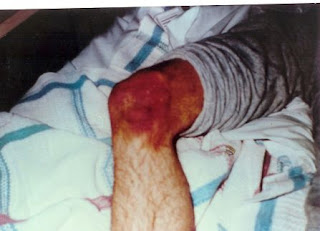 Back in 1989, the sign in the first photo read GAGE PARK FINER FOODS, and I marveled as I read the words from impossible angles. The break in the traffic in the second photo shows where I was standing, on the yellow line. It was 11:11 AM. When I hit the ground, everything in my mind split open and outward; the best that I can explain this is by thinking of a wet handful of sand hitting cement. I was unconscious for 20 minutes, and when I woke up, the first thing I heard was the Pakistani grocer calling out "Not to touch! Not to touch!" I could not see my arm, my head was bleeding, and in some only-Wayne-could-do-that way, after my arm broke, my own fist knocked four teeth out from behind my left jaw. While I was gone, because I to this day KNOW I was no longer part of this life, I was in a grey fog, like the false dawn an hour before the sun rises. I recall looking around, shrugging, and walking forward. There was no light, no flashing neon, no wisps of blackness swirling around my ankles. I walked for awhile before he came into view. I swear on the Polish Bible on my shelf, I came face to face with David Janssen, Dr. Richard Kimble, THE FUGITIVE himself. Dead at the age of 49, on Valentines Day, 1980. Kimble was always on the run, looking for the one-armed man who killed his wife. My subconscious was still functioning, trying to tell me I had one arm now, at least for the next 68 days. Kimble had this quirky smile, he'd use it when someone like Ed Asner or Terry Savalas said that he looked familiar. He stood before me and I could not pass him. He gave me that smile, somewhere between Elvis's sneer and Etain's smirk, and said that it wasn't time yet. Nothing about my Creator, my Higher Power. There was nothing around us, no deserted streets, maybe it was false dawn because The Fugitive was filmed in glorious black & white. I am sitting here, my chin in my palm, recalling the image. He put his hand on my shoulder and patted it, as if he knew I was going to make it. The television doctor, my emissary. And then he was gone, I was staring at gravel in my eye and listening to the Pakistani man. Not to touch. Not to touch.
Posted by Wayne Allen Sallee at 3/15/2007 09:15:00 PM 7 comments:

The Clues Were There 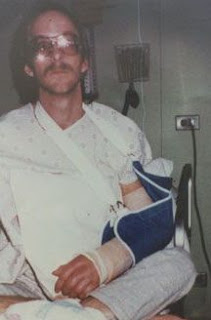 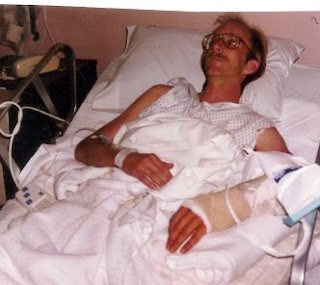 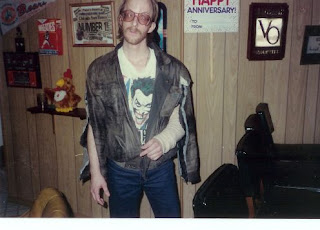 March 18th 1989, the anniversary coming soon enough, I already have the heebie-jeebies, the restlessness of recalling being very close to my Creator. The night before, I had watched DOA, that Saturday morning, a rainy, icy, pitiless day, I left home for my doctor's appointment with page 243 of my novel in my Smith-Corona. I saw the dust on that page 68 days later. Another clue, besides the Edmund O'Brien movie, was that I had been rereading Nelson Algren's NEVER COME MORNING. I left the office and 30 seconds later the nurse at the front desk saw me flip up into the air. My first real memory of that day, I recalled earlier moments later during my recovery, was of the EMT cutting open the sleeve of my new and expensive suede jacket sleeve. I asked him not to and he told me, quite matter-of-factly, that it really didn't matter because both bones in my left forearm were sticking through the other sleeve. Above are the photo of me on Day 2, my hand like a sausage, useless as my right hand because the bones took on lives of their own just below my elbow. The other photo, again forgive my glasses and overall scary face look as my hairline receded, shows the torn jacket. I kept it until the tenth anniversary and then I burnt it.
Posted by Wayne Allen Sallee at 3/15/2007 01:28:00 AM 4 comments: