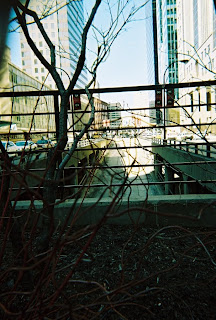 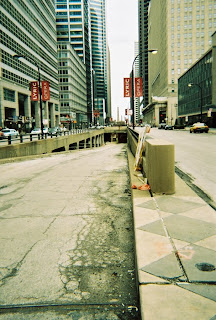 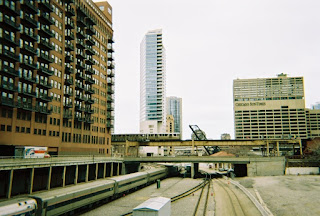 First, my Ubernet has been down for three days. Rumsfeld doesn't even take Easter off. Second, I don't know why I couldn't post text with my last post. I again blame Rumsfeld.  I say his name the way Seinfield said "Newww-man." Anyhow. On my trip to Arlington Heights, the specific train I took, which you can actually see (well, the same route), is in one of the shots posted tonight. But I had to pass over the bridge nearest the Lyric Opera House. In my novel, one of my main characters, Mike "Surfer" Surles, commits suicide by pushing himself over the railing and into the water, his demise being somewhat of an epilogue as his body only resurfaces with the spring thaw ( a common occurrence here). His empty wheelchair went rolling down the long hill past the Opera House, I was really going for visual effect, and the empty chair galvanized the other characters into being much more proactive for the remainder of the novel. And that's the story.

The photos from today are just two views of  where Wacker Drive becomes both Upper and Lower Wacker Drive, as anyone who has seen either the Blues Brothers or the Dark Knight can attest. Still, if you lived here, or worse, had a job interview, we  have an East, West, North, AND South Wacker Drive. As well as an East Wacker Street, that is about the size of a turd. Lower Wacker is cool, and you really have to be here to get the effect of how you can walk down one street and go from intersecting Lower Wackerand then coming back up to street level. The only homicide on record here involving an arrow happened in the 80s, a homeless guy ended up shot in the chest with an arrow. Never solved, the guy a John Doe. I suppose if I was a murder victim, I'd like it to be unique. Maybe a smiley-face pitcher of Kool-Aid stuck on my head.
Posted by Wayne Allen Sallee at 4/06/2010 11:04:00 PM 2 comments: