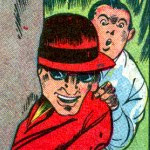 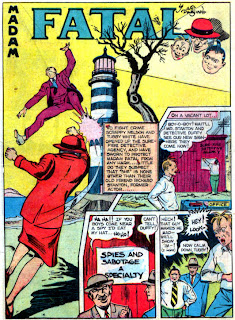 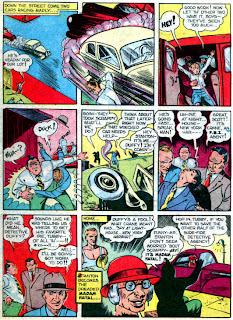 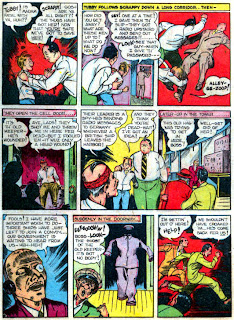 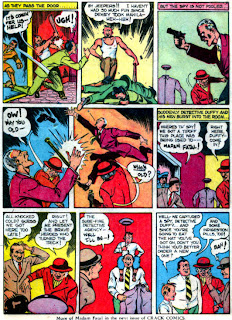 Quality was a comic publisher that put out a fair amount of books in the 40s, and I just yesterday learned of Madam Fatal. Rather, the fact that Madam Fatal was the first cross-dressing hero, as I did know of the character by name. DC purchased Quality's heroes in 1956, but as could be expected, the character was never used, although many Quality heroes were never used, and many were only mentioned by name.

The character was created by Art Pinajian, whose other creation, the Invisible Hood, was more well-known. As with Fletcher Hanks, Pinajian's collected body of work may soon see publication, and he also had a fair amount of noteriety as an abstract painter. For the most part, Richard Stanton, who had a pedigree in theater, dressed up as an old woman, surprising bad guys by using a walking cane as a quarterstaff. His impetus for fighting the good fight was to get clues on which bad guy had kidnapped his gal. This was never resolved, most likely because there'd be no reason for the character to go on, but no, truth was the comic he appeared in was cancelled, as so many were after WWII ended. Somehow, westerns became big, before all the science-fiction of the early 50s. And there you have it, the story of Madame Fatale
Posted by Wayne Allen Sallee at 1/31/2010 10:48:00 PM 2 comments: