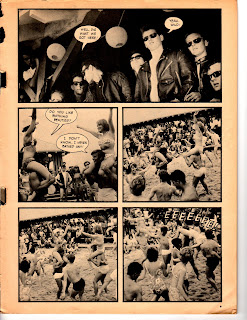 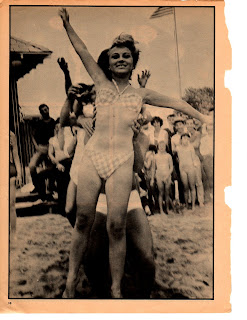 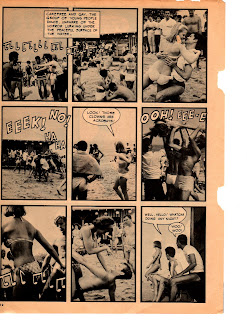 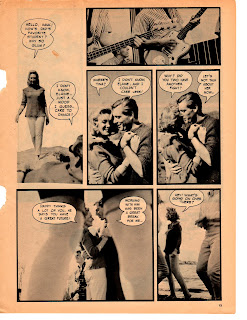 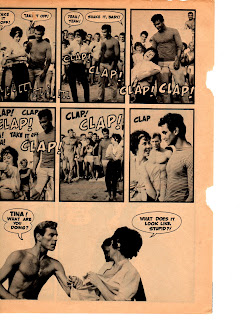 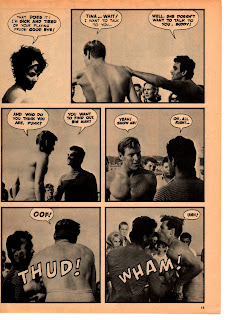 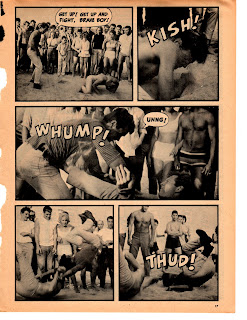 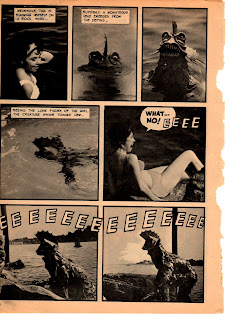 I've skipped a few somewhat repetitive pages--if you recall, Tina dances for over six minutes--so we can get to the actual monster tonight. Well, the greasers show up, but nothing really happens from there. OK, I took notes here.

Oh, by the way, a few of you mentioned seeing this fumetti and/or not seeing the film. I had a VHS tape from maybe 1985 with HOPB following Elvis in GIRL HAPPY. Now, that would make a great fumetti, with the late Gary Crosby and the still-hot Shelly Fabares. Anyhow, I bought a DVD player about three years back, and remember that Flashback Weekend with me & Michael Berryman? Well, I purchased, all from the same guy, HOPB, EL TOPO, and Bobby the Mitch in THUNDER ROAD. Just try and figure out my taste in movies, Mr. Dealer Man, I dare you.

OK, Act II, like in all the Quinn-Martin Productions. You know, THE FUGITIVE, etc. Tina is, of course, still dancing. Then, out of nowhere, this blonde chick decides to jump through the fourth wall, and then it's back to Tina. Everyone dancing now, with a blonde in the upper corner having a dubious bikini bottom, if you ask me.

Hank's sister Elaine shows up and suddenly the camera is filming from between a girl's legs, and then Hank fights another guy who wants Tina to undress, OOF! UNH! THUD! WHAM! WHUMP! THUD! We know how this ended, with Hank weeping uncontrollably and peeing into the sand. After I saw ANIMAL HOUSE, I always thought of Hank as Greg Marmalard. (Note: I caught some of HOPB back in the late 70s, when we had FREAKKY FILMS on prime-time Saturday night, thanks to ABC.)

Well, during the brawl of sound effects, Tina wanders off to an outcropping of rocks to sulk. Or drink. Or sing. Who knows with her? And then, of course "emerging from the depths," the monster in all of his hot dog mouth monstrousness. And if you think Tina is screaming now, wait until you hear her screams in Act III. Plus, newspaper headlines!
Posted by Wayne Allen Sallee at 10/07/2009 11:11:00 PM 2 comments: