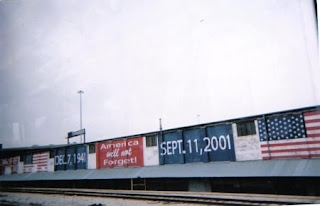 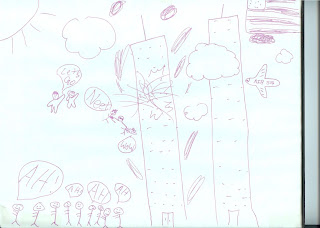 Grace was asking about the memorial this morning for the first time. Abstract questions, like, did they catch the guys that did it (I don't believe she knows that planes were involved). Ashley was Grace's age on 9/11, and I'm curious as to what was said at the Tobin schoolyard today. Another thing re: the date, I'll get a resurgence of belated birthday wishes, because people know my birthday is just before today's date. Ashley, who way back when drew the picture of superheroes catching people jumping from the towers, can now discuss her thoughts on 9/11 being a set-up. I'll not get into that, or my thoughts on the same, it's just another example of how time has passed. In Ashley's case, I wonder what they talk about at the schoolyard at Reavis. If it's not in lock down. I suppose I would not have posted on this if it were not for Grace's questions this morning. But I am now adding a story I wrote to get myself mentally past that day. For those who have never read an interview with me or seen me speak, the one thing I always do is answer questions in my head by writing a story. All the way back to "Rapid Transit", my final paper at UIC in 1982 but nowhere close to the story that went into print in 1985, I get trapped, I write. I am certain several of you have read this story, or know of it. I hope that my frenzy is apparent to any new readers, and yes, the schoolyard conversation Ash was having that is described in the story was real, real enough that after she went to bed I typed like a madman for three hours to get the story the way it needed to be.

Yes, he could experience the end of his days through his fictional characters. And he could think of ways to alter or adapt to the present, by starting fresh, even though he never would, short of being in a Witness Relocation program. But there was no changing the past. The seasons had changed, leaves of red and orange fallen, window decorations of ghouls and spider webbed hedges madly juxtaposed with flying flags hanging from poles near driveways and smaller flags on suction cups in windows next to the goblins and toothy witches. September 11th had happened. It wasn’t a story. And it might never be simply a thing of the past. Let go and let God. Maybe he would, come the snows of December or January. For now it was more difficult. The man was putting up a front for the people around him; his family, co-workers, his godchild. Mostly his godchild, because of how he felt on that beautiful sky blue day when he realized he could no longer expect to protect her with absolute certainty. He had written horror stories for fifteen years, but the hijackers made him feel little and inconsequential. For that is what terrorists do so well. Mohammed Atta did what Hannibal Lecter never could. And the man understood why.
He was no longer sleeping well. He would type his stories to the point of exhaustion, masking the spasms with pain-relieving gel, laying down long past midnight, only to waken at three-fifteen to the sound and image of a passenger jet crashing into the Sears Tower in a sky the brightest blue. He would lay there unblinking in the darkness, his nostrils burning from the pain gel pressed into his shoulders and neck muscles only now, the smell was that of jet fuel.

Awake then until the false dawn that Chicago’s Octobers bring, he sees himself jumping from a hundred stories up because the very air around him is on fire, of the crunch of body parts beneath his feet, the crunch of the last hijacker’s nose as he, the greatest hero ever, crushes the terrorist into pulp and then that final hijacked plane goes into a nose dive and crushes everything into pulp.
He imagined screams and then the dreams were of explosions in Union Station or of several swarthy men leaping forward on an elevated train, praising their God, before blowing everybody up. The man used to remember when serial killers were the worst thing to conceive. His godchild knew all about Stranger Danger, but a Christopher Wilder or a Andrew Cunanen or the BTK Strangler operated almost by chaos theory.
But how do you live with terrorists who will just as easily die with you? Certainly, the man knew enough people of European extract who would say this terrorism is nothing new if you have ever been anywhere else in the world. His doctor emigrated from Croatia in 1984 and often spoke of mass graves. Even rotund Henry, who sold lottery tickets in the lobby of a downtown building, said that a plane crash and mass death meant next to nothing in Pakistani life. Just another day in paradise.
He explained this in simple terms to his godchild, how in other lands, you could not own a television or radio, women could not laugh in public and had to hide their faces.
The man finished up a story he would be reading that next week at a bookstore near the University of Chicago. He lay back in his chair and dreamt one last time. In his dream, he is on the rooftop of a building several blocks from the Sears Tower. It is overcast, rainy.
He turns to stare at me, a distance away.
“Remember the plane hitting Tower Two?”, he asked. It came up in a graceful arc on the television while everybody was watching smoke coming from the north tower. A commercial plane, the newscasters were saying. “ Then, boom, the fireball.” I jerked away.
I looked over LaSalle Street, the elevated tracks like Lego blocks far, far below. But the air around me was not on fire, nor would it ever be. A gull arced past, not a bit of sky in its path, flying gracefully past building after building. Like the second hijacked jetliner.
The man wanted me to look at him, as if I was seeing into a mirror. He took a gun from his jacket pocket, waved it in an arc. Though the sky was grey, the weapon glinted and it could have been a less-benign bird. Aside from gulls and pigeons, Chicago even has peregrine falcons that roost like gargoyles on upper ledges.
“Look how it curves upward, purposefully, with a mission.” He stares at me, unblinking. He has an almost beatific smile. “Tell her I can’t take the dreams or the reality anymore, will you?” I don’t move.
Then he arced the gun away from him, off to the right, like a gunslinger in a bad film. He pulled the trigger then, after pointing the gun at me, and the last thing I could think was what was faster, the jet hitting Tower Two, or the bullet coring into my left eye socket?
I awaken on the couch with a start. It is an early Sunday afternoon and my godchild is typing away at my computer’s keyboard. I shut my eyes. A passenger jet hits the Bank One building and the keyboard clacking becomes severed bodies slapping into the plaza’s water fountain. I shake the image away and then I see a pair of hands in plastic handcuffs, a woman’s wedding ring on one bloody finger. The hands are twisted in a weird type of desperate prayer, and the tendons and muscle are severed past the wrists.
I do not know when I will stop living like this. The man who shot me in his dream nods his head in solemn agreement.
The gray behind my eyelids is a field of containment.