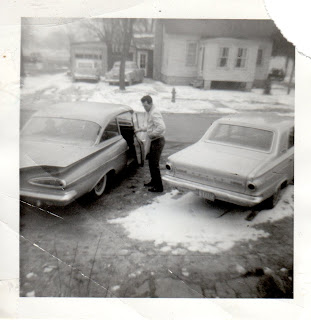 I have had this photo on my bulletin board for several years now, after finding it in a box of other shots. That's my dad and I know it's Streator, because there is Stan the Big Hairy Deal guy's house across the way. I miss the old square frame photos, but this is one that didn't have a date stamped on the side. From the cars, I'd say early 60s at the latest, because we had a '57 cobalt blue Bell-Air when I was a baby, but that was gone before 1960 was done with. The car on the other side of my dad perhaps belonged to my Auntie Irene and Uncle Bill, but Bill ran a body shop from behind their house on Hall Street, and it might easily have been a paying customer's jalopy. I've written of Streator before, how we had little money and so all the family converging in Streator made for a cheap weekend. All-nite poker, the kids sleeping on end tables and dresser drawers, me outlasting the bunch by watching Godzilla movies broadcast from some station in Bloomington. All the adults smoked, the house smelled like the body shop, and beneath it all was the smell of glue and paint for my oldest cousin's Big Daddy Roth models. I am assuming my dad has just come back from Safarcjeks over on Illinois Street with a carton of Pall Malls. He stopped smoking in 1969, by the way. Not really a mystery photo, just one that is unique because it doesn't match up with any one other photo from the bunch.
Posted by Wayne Allen Sallee at 12/23/2009 09:36:00 PM 4 comments: