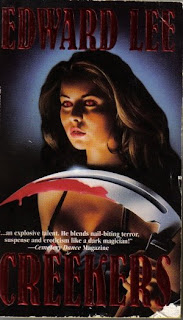 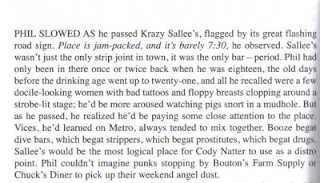 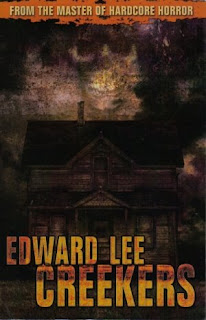 True story: Ed Lee wanted me to write a seven line poem he would use for his book CREEKERS. The poem in question is called "Bighead," and was written on a bathroom wall above a urinal. I told Ed I wanted seven dollars. And this was 1994 dollars, mind you, when the US dollar meant more, am I right? One day I get a package from UPS, it was one of those poster tubes. Weighed several hundred pounds, or so it seemed to my prostate as I carried it upstairs and pried it open. Seven dollars in pennies. Also, minor treasures like scraps of notes when Ed still worked in Bowie, Maryland. An empty pack of Ben-Hur cigarettes. (If anyone reading this can locate any Ben-Hur cancer sticks, I'll buy them from you, and not pay you in pennies). Ed likes eating crab, and so there were crab claws mixed in the pennies. He also put me in the book, Wayne the bartender at Crazy Sallee's is killed early in the book, and as I read the re-release by Necro Publications (the new copy presented to me quite graciously by Ed), I couldn't help but feel like the Jeff Fahey character in the PLANET TERROR portion of GRINDHOUSE. Remember all those old Pinnacle covers from the late 80s and early 90s? Sid can tell you a story about BLOOD HUNTER where the cover meant very little to the book other than to show a girl in danger. If it wasn't that, it was a girl possessed. Or a baby with a skeleton in his eye. Or a skeleton rattle. I always thought of how many cover editors deserved having skeleton baby rattles shoved up their collective asses. Say what you will of the specialty presses, but at least the covers have a decent look, at some points stellar, as in Alan M. Clark's illo to Larry Santoro's JUST NORTH OF NOWHERE, published by Annihilation Press. Getting back to me because, well, after all, its ALL ABOUT ME, I had fun reliving a book I read on the interstate ride home from Shelbyville, Kentucky fourteen summers ago. Ed's in Florida and still eats crabs. We still send funny envelopes to each other and I'm certain Homeland Security has their eyes on us. HEY! If you guys in the NSA are reading this, get me some Ben-Hur cigarettes. I will pay you, I really will. In decade old crab legs...Wayne
Posted by Wayne Allen Sallee at 7/01/2008 11:01:00 PM 5 comments: