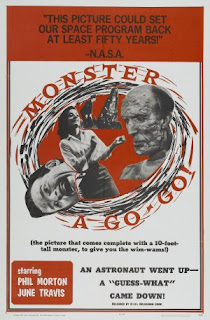 Well, as with my post about THE BREEZE HORROR a year ago, it has now been 12 months since Steve in NZ reminded us that his favorite zombie movie is CHOPPER CHICKS, etc., etc. I saw that at a convention in Providence a long time ago, along with RE-ANIMATOR. Well, Charles emailed that he and Lana thought of me last night while they watched MONSTER A GO-GO on TCM. Capcom missed it, so I can't give too much away, but yeah, I knew it was on. I've been wanting to see this for years. Charles thought of me because it takes place near Chicago, which makes perfect sense, as a squad car was sent to look in a field for a space capsule that crashed. We are told this because a control voice narrates all of this. We see a field, yes, NASA chose Illinois to have the capsule land, because Iowa evidently wasn't available. The cops find a thing that looks like a model, they are actually TALLER than the thing, which is conveniently propped against a bush, and evidently they are concerned because it had been manned (!) and the astronaut was nowhere to be found. The narrator reminds me of the guy who did the intros to all the Quinn Martin Productions (like THE FUGITIVE) in the 60s, so that is kind of cool, because everything is said with a sense of urgency even when it is meaningless. "This is a world of ifs. If only they had not left the party. If only." Sounds like Dubya's Saturday radio address. Yea, the monster (presumably the astronaut has become a monster) is in the vicinity of a happening dance party at some kid's house out near a desolate field where NASA requires its manned spacecraft to land. So there's the go-go part. Bill Rebane started making this film in 1961 and lost funding, and H.G.Lewis took the film and finished in it 1965. With a different cast, in the same roles, because by then most of the kids were in college or in jail. Or had four year old kids and still trying to get SAG cards. I can't give away the ending because it is completely mind-bending. Yet, at the same time, brilliant. I have no doubt that this one film caused everyone to start seriously looking at drugs to get them the hell out of this reality. Yes, I am indeed saying that we can blame the existence hippies on this film. And since it double-billed with MOONSHINE MOUNTAIN, it then begat hillbilly hippies. The best part about this film, compared to say, THE HIDEOUS SUN-DEMON, is that you see absolutely nothing at all. The narrator tells you every damn thing. Even the WTF ending, when the viewers looked at each other, saying Now he didn't just go do what I think he did...did he?" (Meaning the director, bless his mind-bending heart). By all means, go to TCM, put the film on your email schedule (my notices consist of pretty much Mitchum, Frank Gorshin, Jack Lemmon, John Agar, VILLAGE OF THE GIANTS (Beau Bridges' first film), and MONSTER A GO-GO, now crossed off that list. Do it now. Too many people say PLAN 9 FROM OUTER SPACE is the worst film ever made. People gotta quit hatin' on Ed Wood.
Posted by Wayne Allen Sallee at 11/22/2008 06:06:00 PM

I was reading an interview with Jeff Bridges where he said that his brother Beau played basketball for John Wooden at UCLA!!! This totally boggles my mind. This would have been on some of those teams in that string where they couldn't seem to stop winning the NCAA tournaments.

I'll have to see MONSTER A GO-GO. However, I noticed that I don't seem to have as solid a taste for high-octane movie crap that other people do. Not sure if I could sit through that one. I did sit through SUN DEMON, though.

I like the story about RAT FINK a BOO BOO. The budget was so small that when the logo editor left out the "nd" on RAT FINK and BOO BOO, they couldn't afford to fix it and so instead released it the way it was.

I'll have to buy the MST3K version soon.

Yeah, leave Ed Wood alone, people! The Creeping Terror (some of which is filmed at the notorious Spahn Ranch, former home of the Manson Family) remains the ultimate in Badfilm! You've got yer basic hideous space monster made from carpet remnants, a hootenanny invasion, lost soundtracks overdubbed with narration, Guitar-Fu...oh, it's just classic! First time viewers would do well to down a few shots of tequila and a mild hallucinogen before watching to, uh, enhance the experience.

Oh man what a psycho film. I should have had a six pack before it started.

Sorry for my recent absence...Been busy with "real" life, y'know?
As a sci-fi film there wasn't a single, redeeming feature. The sound was atrocious, the camera work was asinine, the acting was laughable, the plot was virtually non-existent, the "special effects" (i.e.; the impressive "cap-sool") were sophomoric, the narration was over-written & over-acted.
I was able to appreciate it as an inadvertant comedy, however. We laughed so hard at the ending, for example, that I was almost in tears!
Still, I was glad it was only 70 minutes. Much longer & it would've just gotten pathetic & I would have been annoyed at having wasted my time on it. I can waste 70 minutes laughing at total cheese, however. No problem.

I just realized that I have seen 'Monster A Go Go', a couple months ago with my nephew! We watched the MST3K version with Joel and the 'Bots (including the hilarious send-up of the short 'Circus On Ice'!..."We are agents of Satan...!"). It's in 10 parts, but it's worth it to see it embellished with the banter...otherwise there is nothing much to see in this movie at all except guys walking around in a field. And you're right, it's the worst ending ever!!!!! For sure, 'Plan 9' is better-badness. :-)

If anyone is so inclined, it's here on Youtube: