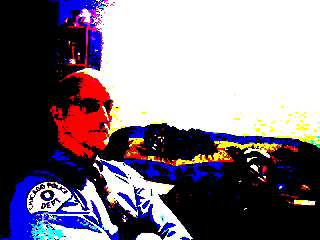 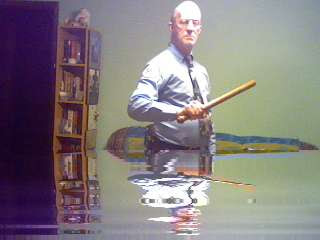 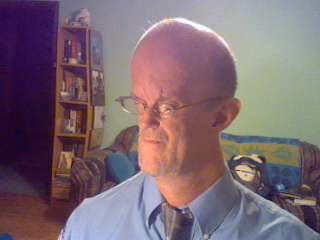 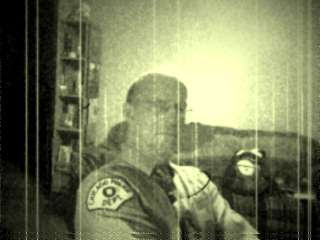 I went to a party last night with Bart and Deb, my partner in crime at the printing plant and his wife. It was last minute, so I dressed as a cop, I picked up a cop shirt with an old emblem a decade ago, it is actually from the 8th District, my dad's old joint. It's very hard to find shirts without the emblem torn off nowadays. Enough of that. I ended up screwing around with the camera as I waited, Bart had called twice about a delay. I love the effect on the web camera that has the swamp water. No way was I going to bring the baton, though. Not the hollow kind cops have now, the old ones were no nonsense. Two words described it, and you'd likely hear one of them in just about any rap song that need a rhyme for trigger. Its faded away from the decades of various people handling it, but at one time you could still see bloodstains courtesy of the Democratic convention of 1968.
Posted by Wayne Allen Sallee at 11/01/2009 08:30:00 PM

You look almost too comfortable in that outfit, my friend. Remind me not to piss you off.

Wow. What a collector's item. Was it Abby Hoffman's or Tom Hayden's blood on it?

Now I know why you are so smart, you have a really huge brain.

I used to know a couple of local cops. When they had to trade in the old clubs for the new ones, they were glad. They really liked the new ones and they showed me how they worked...the were actually like collapsible metal batons with a steel ball at the tip. They could really do some major-league damage with those and enjoyed using them. I recall being horrified by their glee in displaying those weapons and discussing how they hurt people. Soon after that I stopped talking to them.

When "Officer Friendly" came to our eighth-grade class at old John H. Kinzie Upper Grade Center, he told us the "official" name for that imposing club was a "baton."

Before we got that answer, when Officer Friendly (whose real name was Rubin) quizzed us on its name, my old friend (now long gone) Terry Donovan ventured: "Der schtick?"

I knew one thing -- I was never going to see a drum major/majorette leading any parades with a baton like that.

Recently, a number of cops have been leading a "Back to Baton" movement. Those hollow clubs make too much noise -- like sound effects in a Three Stooges short: BOOOINK!