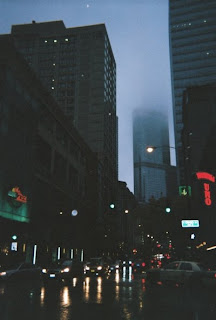 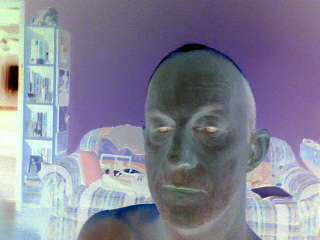 The Misty Mother Fog In A Dead Poet’s Dream

I wrote that phrase back in college and I still think of it whenever the fog hits Chicago. More often than not these days. If the photo shows up above, it’s the Trump Tower that dissolves into the greyness. That was last Thursday. But if I hadn’t been crossing the street and seen the building, I likely would have continued on to the subway stairs humming Hallowe’en songs. Instead of my dumb line from an okay poem I wrote almost thirty years ago. The Ramones’ “Pet Semetary.” Elvis’s most haunting song ever, “Long Black Limousine”, from the Memphis sessions in 1968. Henry Mancini’s “Experiment in Terror,” which was the theme for our long-departed Saturday night CREATURE FEATURES, which ran only the Universal Monster films. About the only one I catch myself actually SINGING is Jan & Dean’s “Surfing Hearse.” She might be cherry, but she could be worse, my surfin’ hearse. Fun fact: they also rhyme spooky with kooky. Oh, those wacky surf musicians.

I missed out on the entire month of October these last three years. Last year I was involved in a writing project not my own, typing maybe twelve hours a day, and the previous two years I was at the infamous printing plant, back then it was standing on my feet twelve hours a day. And I love October, not just for Hallowe’en. This entire month I’ve been putting monster-related content on my blog, including scanning most of a fumetti of HORROR OF PARTY BEACH just because it was time someone saw that thing online. I never had the time the last three years to do something every night, and before then my blog was barely had legs. I’ve had the chance to reminisce about childhood toys like the old Vac-U-Form that made Creeple People and an old vinyl record my older cousin had with audio clips of Lugosi and Karloff.

October is also a month of death. It seems that I know an abundance of people with September birthdays. Thankfully, the deaths are far between. Important deaths, just the same. Karl Edward Wagner, back in 1994. Harry Fassl last year. A neighbor girl with epilepsy, so long ago I can’t remember the year, the first non-familial wake I attended. Fog and crappy piles of muddy leaves and I wonder how it must be in Houston or LA, what orange and black decorations look like in sweltering heat.

There will be another death this week, my oldest cousin on my daddy’s side, down in Shelbyville. Off the respirator since Friday, now with a lung infection, she has a DNR. I was joking with Dave in an email earlier about how I had started this essay and was interrupted by updates from different aunts in Kentucky, then while I was in the middle of our email the phone rang yet again. My dad’s hard of hearing and so I’m the mouthpiece. He’s also the only one up here, staying after Korea to join the police academy. I’ll likely be on Greyhound to Louisville on Friday. We never traveled as I grew up, but for Father’s Day in Shelbyville when my granddaddy drove down from Dry Ridge. My first time anywhere besides Streator, Illinois and the I-65 corridor through Indiana was when I attended the World Fantasy Convention in Providence, in 1986. People come home to die in Kentucky. Quite the different world than Chicago.

I sometimes wonder what I’d be writing if I grew on a farm thirty miles from the big city instead of this place. Well, the farm is gone, and so are the road marks on Flat Rock Road, the “colored” cemetery (as I was brought up with that word on both sides of the family) on one side of a gravel road and another cemetery across the way, one with rusted spoons melded to thin pieces of metal that read BABY. Flat Rock Road is a subdivision now, the homes in an oval around an egg-shaped man made lake. Maybe it would be like course correction, my dad a Statie, or working for the Simpsonville police. And yet, the second most vile story I’ve ever written, “The Shank of The Night,” is based on events not in Chicago, but from a small town just over the Ohio River from Louisville. So I might have ended up writing what I do. All in the past now, I haven’t had grandparents in fifteen years. If I go to Kentucky, I go it alone, on Greyhound. The bus pulls in at Sixth Street and Muhammed Ali Road a block or two from the river. I’ll wait for my cousin to pick me up and sit in the food court while he makes the half-hour drive, in the early morning hours. There’s a Chevron across Sixth, and I drink coffee and watch shadows become people lumbering to their early shift like zombies, walking through that misty mother fog.
Posted by Wayne Allen Sallee at 10/27/2009 11:05:00 PM

I've never spent much time in Kentucky. A couple days at a time, usually around Lexington. Good area for old comics, believe it or not. Because of its proximity to Ohio and the industrial belt, I've been told. Lots of comics all during the great days of the comic book format. Tons of Golden Age comics swirling around in attics and closets and basements and stocked away in steamer trunks. It's true. I saw it and bought my share on trips there.

I like October. Nice month, generally. I don't mark deaths they way you do. I can't even tell you what months my parents died in. I don't dwell on it. Of course I'm disconnected from my large family...having been estranged from my brothers and sisters for a couple of decades now. I don't miss them, the way they don't miss me. That took a while to sink in, but once it did...c'est la vie.

One of my favorite writing pieces of all times is Bradbury's The October country. "that country whose people are autumn people."

Good story and pix, especially for this week. And a very nice ending. The Trump Tower almost looks like the WTC on "that" day. My condolences as to your cousin. :-(

I thought for a moment that Vac-U-Form was the toy that my brother and I were trying to think of that we had, but it's not. Ours was the one where you put the square piece of plastic into the "oven" and it would change shape into some kind of monster/animal/dino. Then you could also heat it up again and squish it back into a square, and repeat the process. Eventually the plastic lost its elastic "memory" and would not perform properly anymore, and the oven got to smelling like burnt toys. Does anyone remember what that toy was called?

If you grew up on a farm, you might also be writing stories on the disgraceful "killing" of the American family farm concept due to the international takeovers. Or, horror stories about zombie farmers and farm animals, heheh. Whatever it might be, it would be good.

That top photo reminds me of a night in Toronto, when the fog was so thick (& slightly off the ground,) that the CN Tower seemed to disappear about 2/3 of the way up. Wish I had my camera at the time!