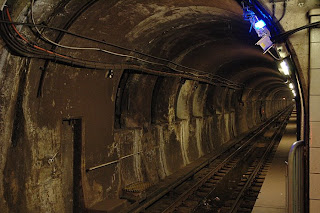 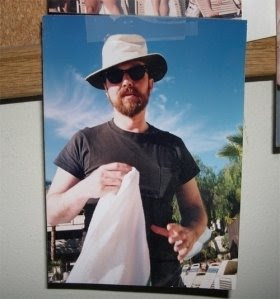 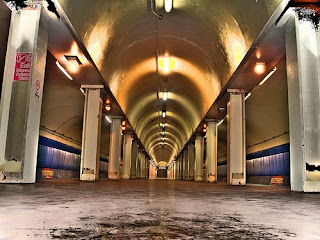 I'm still creeped out as I type this, but in an eerie, calm kinda way. I went up north to hear Not From Michigan Mike read at Twilight Tales tonight and got a lead on some other job involving printing, so that's cool. Then I bought a bag of fries at the McDonalds on Lincoln and Fullerton, thinking the girl in front of me had a Godzilla foot. Turns out her sneakers were the same color as the tiles. Then the older guy who takes my order has a look of sheer and utter terror on his face. Maybe it was because I was wearing a Cleveland Indians shirt I bought at Unique Thrift for $2.00 and is now my favorite shirt.

OK. This is still so weird. I'm admiring the full, yellow moon rising above DePaul University, eating my fries, looking at a girl with long black hair waiting with her bike on the northbound platform, me thinking, man, I am twice her age. I'm on the train then, reading BUTTON, BUTTON, a collection of short stories by Richard Matheson. I hear a guy behind me calling the CTA about how late the 87th bus goes to Cicero. I turn to tell him, because of course, I'm going the same route. But the guy looks just like Harry Fassl. Without the voice. Skull, head, smile. I knew the guy wanted to talk, even when we got on the bus eight miles to the south. I looked at him, thinking, Jesus, he has shoes like Harry, and Harry wore big shoes. As we walked past the Dominicks to points west, he finally turned to thank me again. I really think he was wondering why I was all gibbledy-gibbledy. I told him no problem, standing there under this full yellow moon in a deserted parking lot, thinking of all the times during the summer where I might have seen Harry & Diana...The Red Lion, their house at 1111 Scoville, having burgers at Goldy's before watching crappy movies about giant spiders. This guy of course walked faster than me, being tall and all, and I followed his path, and where I cut through the church parking lot to get home about a half-mile from the bus stop, I could see him several blocks ahead, like a giant tree moving in the shadows between the streetlights. And you know what? Harry would have loved hearing how creeped out I was.
Posted by Wayne Allen Sallee at 6/08/2009 11:27:00 PM

being around people can always creep me out if I'm in the "write" frame of mind.

Try not to eat too much McD's food, it's not good for what ails ya.

Dear Wayne---
That is some weird story!! Loved the descriptions of the girl with the Godzilla foot, and the girl with the long dark hair...the full moon, and the creepiness.... the guy "like a giant tree moving in the shadows between the streetlights" that's fine writing! ...and you say he looked just like Harry--except the voice...well, his voice was so distinctive...
I had a Harry sighting, too (months ago, in January) -----this took place on the Blue Line, yes, it was in the subway...a guy staring at me, looked just like the young Harry---maybe it was the jean jacket and
Army pants combination, but the long hair and beard was uncanny...and why was he staring at me...like he knew me...(maybe I reminded him of his mother) but then Harry used to say tthe sexiest
female on Star Trek was T'Pau, so maybe this young guy had similar tastes...no, I did not talk to him...but he smiled as I got off the train...It wasn't creepy, though...it was like a connection across time....
"We are patterns, persisting," Harry used to say....

I think your adventure would make a great short story, I really do...

Those photos are all your work?!! I am amazed at the quality of them.

Barry Gifford, as I recall, did a book of photos and prose impressions. At least I think he did that. Something done about Mexico border towns?

Waking dreams--these are indeed disturbing events. Are they real? Were you asleep? Hallucinations? All questions to be pondered when the intellect allows it to be done logically.

When I was a young man I suddenly found myself all alone--all of my siblings were gone and my dad was dead and my mom fading toward death slowly and in the hands of hospitals and older siblings. I was 20 or so and living in a decrepit apartment that was in a building my parents owned. No job, no money, but at least a roof over my head. It was a horrible roof, though. I had some EXTREMELY disturbing hallucinations and waking dreams in that place. I don't like to talk about them, generally. So I know what you mean.