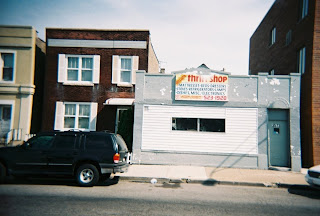 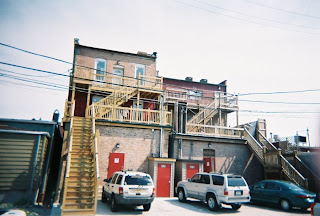 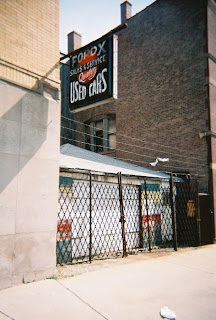 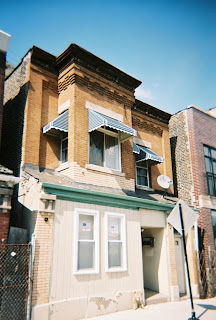 After I posted last night, I let my dog out and saw that the clear sky had become more misty than cloudy, adding to my belief that I had dreamt my ride home, that there was no reason to be completely mortified at a stranger who I had, in fact, helped. Another odd moment, I had forgotten to write before, as I cut down Lawler towards the church parking lot, a car dropped this teenage girl off in front of a two-story apartment--far as I'm concerned, they are only flats in the old neighborhoods--and it was just so...quiet. The car drove off, I could hear her keys in the lock, even as I was walking and watching the "tree shadow" walking on the other side of 87th Street. Moments that you know are going to be gone forever even as you witness them happening. I recognized the girl, I'm the lone pedestrian of the neighborhood after all, but hearing her keys as I watched Harry's doppelganger, both senses having such clarity, the kind of detail that makes me hate dreaming because I wake up most mornings like I'm digging myself out of a grave.

Diana, Harry's girl, wrote and mentioned Harry having a phrase, "We are patterns, persisting." If I never ever ever got that before last night, I do now. And now, here are the last of my recent Archer Avenue photos. Earlier tonight, Balzekas officially closed its doors to selling new cars. The place opened in 1933, I can't even imagine what Archer Avenue led to back then, back towards where Chinatown is now, there was the Levee District, the whorehouses, the blind pigs. And for some, Archer was always an artery to get close to Comiskey Park, now US Cellular Field. Archer onto Pershing (39th) and east a few blocks.

These last few are random, all within a block of each other. I thought of just putting them on my Flickr account, but it got me to post about Balzekas and, more importantly, Harry and Diana.
Posted by Wayne Allen Sallee at 6/09/2009 11:39:00 PM

Someday there will be a fellow lamenting the leveling of the cellular fields. Around the year 2120, I'd say.

Keep the photos and prose coming. You've actually made me want to photograph my own urban area...only I don't live in it. I live on the outskirts of it.

The sound of keys in a lock. and you always wonder where the door leads that those keys will open.

The Balzekas family started that museum of Lithuanian culture that took over a building that looked like a former funeral home just east of the lot. The museum may have moved since then. I hope the closing of the car lot does not affect the future of the museum.

For many, if not most, in that part of the world a car lot IS a cultural museum, and the only sort of one that counts.

Back in grade school and high school I knew several kids who had ties to the Balzekas family, and to them there was simply no other place to buy a car. I remember how those kids used to say "Mr. Balzekas" as if they were speaking of George Washington, or Lincoln, or the Holy Father. They were big stuff. You're describing the end of a dynasty, the end of an era.

But the end of an era usually describes the dawn of a new one.

So who will we buy cars from now?

Somebody essentially lend a hand to make severely posts I would state. That is the first time I frequented your web page and up to now? I surprised with the analysis you made to make this particular put up incredible. Excellent activity!
Fantastic site. Plenty of useful information here. I am sending it to a few friends ans additionally sharing in delicious. And naturally, thank you to your sweat!
hello!,I really like your writing so much! proportion we keep in touch extra about your post on AOL? I require an expert on this area to solve my problem. Maybe that is you! Taking a look ahead to peer you.