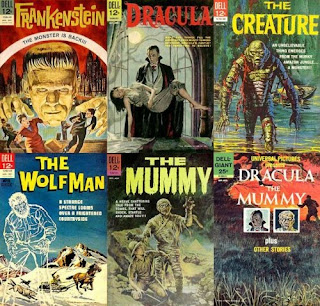 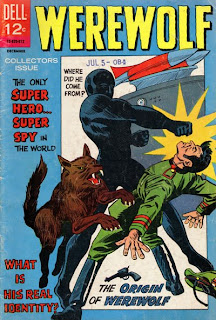 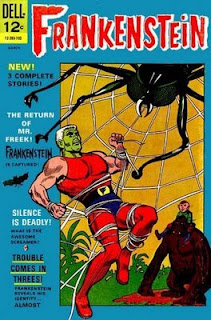 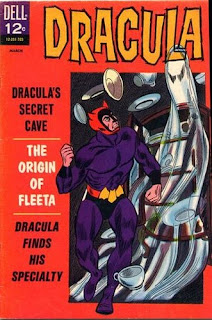 How could this have gone so wrong? Of the above book, in the first image, I bought FRANKENSTEIN at WizardWorld when it was still the Chicago ComiCon (WW does not mention Chicago on their badges or ads, the dicks). When I was in my teens, there were those machines where you saw the comics displayed in a huge vending machine, much like the snack machines in the present. Whatever comic came sliding out, there'd be a different one now showing. Completely random. It might go from BEYOND THE UNKNOWN to LITTLE LULU. This is where I encountered those other nutty books, and I bought them strictly for the names, just as a lot of kids my age in 1972 did. The vending machines were at the now-demolished Fairway, which had always been closed for health violations, and the Zayre department store over dere by Southwest Highway and Mr. Shrimp. Frank N. Stone was a guy who was a superhero who fought wearing a green mask like his ancestor (?) and I think was a lawyer, too. Dracula is the goofiest of the bunch because his series last the longest, seven issues, although issues 5, 6, and 7, reprinted issues 1, 2, and 3 with the price hike from 12 to 15 cents. No reprint of issue 4 and no issue 8. Of course, back then it took longer to see the sales numbers come in, so it could be that by the time #4 was out, Dell realized that that series was doing the best of the three. WEREWOLF was the best, if you could call it that, because the guy was a secret agent and he wasn't a werewolf. But he had a German shepherd named Wolf. I think his series last two issues. It's crazy that I have most of these issues--if I really looked, I'll bet I'm missing three issues out of all the books--but I haven't run into the one-shots. Oh, I just remembered, I have THE CREATURE, too, but someone gave that to me. Oh, Dell, where did you go wrong? Well, even with bad artwork, at least WEREWOLF was worth it.
Posted by Wayne Allen Sallee at 4/01/2009 11:40:00 PM

I remember a magazine article years ago discussing that Dracula-as-super-hero issue you have there. I've never seen it anywhere other than that.

Sure wish I'd seen these when I was a young lad. How much more twisted I'd be.

Dell, like so many other comics publishers, just fell apart. Initially, they were the license holder for Disney. And in the day there were a number of Disney titles that sold--I shit you not--three million copies per month. Now the last license-holder for Disney comics (Gemstone) is relinquishing the rights. So there will be no new Disney comics (once more) in the nation of origin of both the comic book and Disney characters. I can't think of a better sign of the decline of the comic book industry.

The main thing about comic books is this:


Once upon a time, little kids actually took the time to read.

I think the comics vending machine says it all about comics in those days: "Here kid, read it. What do you care who's in it, it's a comics ain't it?"

Of course, there was a certain tacky grace to comics in those days, something that got lost when the industry shifted to adult collectors and the men in capes and underwear started taking themselves seriously...