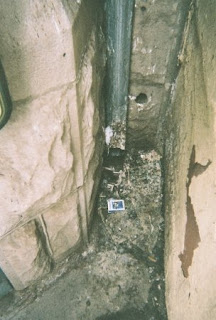 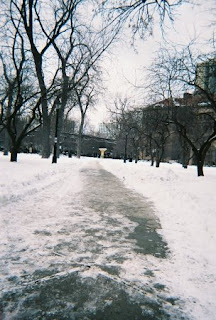 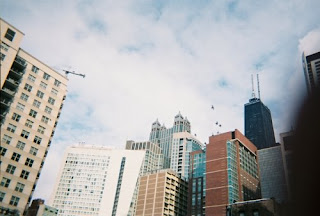 And yet I like screwing with perspective. At this point, I am walking down Chicago Avenue towards the subway. There are some brownstones that have basement taverns or boutiques, and I was drawn to this odd little crevice holding an empty deck of Marlboros. There's also a photo from half a block further north, trying for complete disorientation here, not quite getting what I wanted as the birds had not flown high enough in the sky. I did talk the photo at an odd angle and tilted as well, just to screw with everything. Its still an OK shot, and I could have waited the birds out and taken more photos like those with digital cameras do, but I'm not that way. If I get a good photo thanks to karma, so be it, as it is there's some pretty bizarre angles going on there. And then...Bughouse Square. A hundred years ago, crazy people stood on soapboxes and ranted. Its actually Washington Square Park, just a block wide and a photo I took in afterthought, as I barely had to walk half a block (turning only to catch the birds in my sights)north of the train. John Gacy picked up his victims here in the 70s, when the area was still filled with gay bars, skid row taverns, and used bookstores. The building at the far end is Newberry Library, where I became a legend amongst other Chicago writers (for about 15 seconds) after my novel was put up for sale during their yearly auction. Granted, it meant someone had donated it to the auction, but still. The Newberry Library is a huge thing here, it likely has the original Magna Carta here or something close, so it was way neat to have my book in the same place. In 1998, no one else I knew could say that any of their work had been in the Newberry. This is all upscale now, so its likely you won't see any same sexers holding hands or ranting loons of yesteryear, but I thought a winter photo was in order.
Posted by Wayne Allen Sallee at 2/13/2009 11:34:00 PM

As always, good photos. You do good work for a guy with a disposable camera. Film. What a concept.

Among serial killers, John Wayne Gacy had to be the lowest of the low. He was a worthless piece of fecal matter. Why the world had to suffer his presence on death row for so many years is a twisted puzzle.

And I'm a big fan of your photos, especially that dutch-angling thin you do. You got an eye for the shot...

Well congrats on that Newberry Library thing, that was neat. :-)