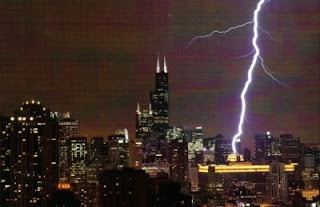 Well, I have come to the realization that I evidently cannot die. Earlier tonight I had another encounter with the dreaded Closet Light Bulb. You might recall my post from back in August, whereas I shattered the bulb with my superhuman polak/hillbilly strength and blew the electricity through half the house. A few hours ago I pushed the Mortality Envelope a bit higher (lower?)and, really, its not like I set out to do these things. The cord fell off the ceiling fixture last night, so I unscrewed the bulb and went to bed. Bought a new ceiling fixture, one of those circular things, from the Ace hardware, which constituted a half-mile walk when the mid-afternoon temps were at their highest, about ten below. So later, I'm listening to one of the CD mixes GW Ferguson sent me, and I'm on my little stool, ready to combat modern technology. I take the old fixture off, thinking, hey I'm fine, the last time I touched the filament in the bulb, and said bulb was gone. You can see where I'm going with this. I put my hand up with the new fixture and OF COURSE I touched the green wire and the red wire together. Last time, I kicked the stool over and dropped to the floor. This time, I just found myself on the floor, I had been listening to a song about Charles Whitman, the Texas Tower sniper, but then I was hearing "Do You Think I'm Psycho, Mama?" The song in between that I (kinda sorta thankfully) missed was "The Homecoming Queen's Got A Gun". So there I was, maybe 6-7 minutes later and about five feet across the room. So, my theory is this: either I can't die, or every time I do, one of my alternate Earth selves is shunted over here. Wouldn't be surprised if that is what happened to PK Dick every time he OD'd on the 200 amphetamines he downed each day. I'm thinking of a story I might write and send to F&SF, where Earth-20 me, who is a very successful writer and still has all his hair to give him a David McCallum kind of look, ends up here and finds he has to suddenly be balding plus lead a pathetic and wretched life.

Speaking of PK Dick, I've also mentioned here about my joint venture with "Horatio Salt" @joymotel over on Twitter, the link to the blog (for those who'd rather read it chapter by chapter) is on the left. Well, it was mentioned today in the Boston Phoenix, by Mark Miliard, and in a second article, names @joymotel as one of the top ten Twitter novels-in-progress, with ours being the only one shared between two writers, and who have never met nor talked, no less. Here's the excerpt.

Toronto ad man John Kewley — he writes concisely for a living — likens Twitter, teeming with constant updates, to a global "brainstream" where users can submerge themselves in others' thoughts, feelings, and existential particulars. So he's co-writing a language-dense, James Joyce– and Philip K. Dick–inspired Twitter sci-fi narrative, Joy Motel, the plot of which plugs the reader into the protagonist's stream of consciousness.

Kewley's writing partner, Wayne Allen Sallee, is someone he's never met. ("We've never even spoken on the telephone.") Nonetheless, they correspond online, and "share a wavelength," and one day, when Sallee tweeted Kewley with "a snippet of a film noir–sounding sentence," Kewley replied in kind. "I sent him one back, to sort of build on his, and we did about 20 of those."

The pair banged on back and forth, braced by the brevity and immediacy mandated by the medium. "You can just jump on there because you have half a thought, and then an hour later, Wayne will respond," says Kewley. "We don't know where this is going. It's real-time writing on Twitter."
Posted by Wayne Allen Sallee at 1/14/2009 10:15:00 PM

I would read the piece you are doing, though.

There are safe methods of removing a broken bulb, none of which you seem to know. If you didn't want to throw the breaker to that part of the house, you could have switched the light itself off before approaching it. And you could have used something as a barrier--thick glove or towel just to play it safer.

Yeah, you need to write that F&SF tale.

Oh, yeah. I'll bet those Lightning Burgers were good. The place looks like it served a good burger.

Man, you're like Batman in Final Crisis, going up against the Anti-Life Equation, dodging the lightning. Fuck me, Darkseid? No, fuck you. Congratulations on the review. The New Yorker just had an article on the online novel phenomenon in Japan, where it's having crossover success to print.

Damn man. maybe you're a highlander or something. Do try and be careful.

Daggummitt! Will you please get someone to spot you when you are doing these things?! (Or at least lay pillows around on the floor in case of the inevitable) On the job we're never allowed to work electrical jobs unless someone is there with us. Pay someone off the street 5 bucks to help or something! :-o Crikey.

And I have long suspected you were the model for Bruce Willis in Unbreakable!

Who ARE you? Marv from Sin City?

Wayne: (growling) Is that the best you can do, you pansy?

P.S. Self-administered electroshock therapy is not particularly effective. I know.